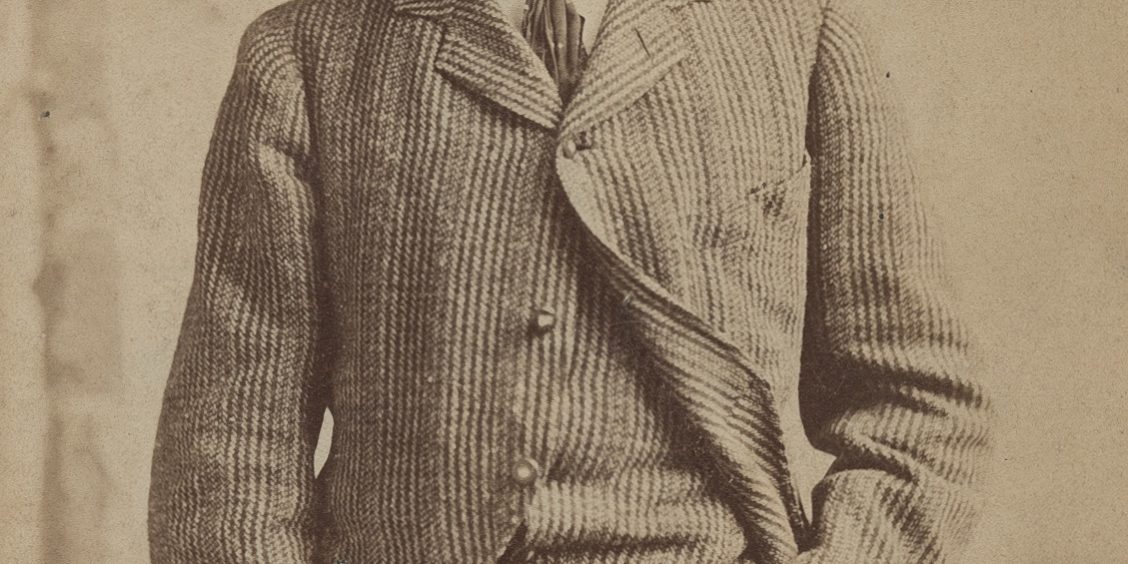 There is something dreamy and transporting about watercolor paintings. They seem to have the magical power to soothe even the most stressed soul. Famous historical watercolor painters include Albrecht Durer, William Blake, Thomas Moran, James McNeill Whistler, and Winslow Homer. “Perhaps the most important watercolorist of the 19th century was Winslow Homer. Homer was a largely self-taught painter who embraced watercolor so thoroughly for his many landscapes, seascapes and scenes of everyday life in 19th Century America. His respect for the possibilities of watercolor encouraged many of his contemporaries to try it as well,” stated Discover the Great Watercolor Artists. Read on to learn more about Homer and how he captured the American spirit in his watercolor paintings. 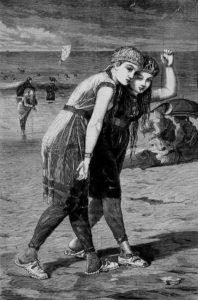 Watercolor is a unique art medium. It has a different effect altogether than oil paints, for example. ARTmine said watercolor straddles the worlds of painting and drawing, and stated,

Since watercolor is so difficult to work with, so unforgiving, only the most talented artists are able to create well-composed works of art with it. Winslow Homer was one of the few of his time that had this talent in excess. 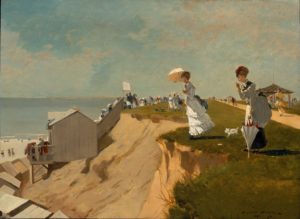 Winslow Homer (1836-1910) was an American painter who is best known for his landscape and seascape imagery done in watercolors. He was born in Boston, Massachusetts. Homer loved both land and sea. His paintings depict this clearly. As stated above, he is considered by some to be “the most important watercolorist of the 19th Century.” There is one main reason he is considered to be the most valuable watercolor painter of his century: he captured the American spirit with a freshness and vitality that no other artist had done before him.

“Winslow Homer was a man of many talents, fascinated by the ocean and the great outdoors, and was one of the first American artists of his generation to work seriously in watercolor.” — Winslow Homer: American Landscape Painter 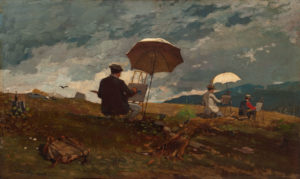 “Artist Sketching in the White Mountains,” 1868, oil on panel (Wikipedia)

How Did Homer Become an Artist?

Winslow Homer became an artist without having hardly any formal training. At age 19, he apprenticed with a commercial lithographer. In 1859, at age 23, he relocated to New York. It was there that he opened his own studio as an illustrator and painter. He regularly attended art classes and illustrated for Harper’s Weekly as well as other publications. This was a primary source of his income for about 17 years.

In 1861, Homer received an exciting assignment: he was asked to document the fightings of the Civil War from the front lines. This unique job likely caused him to draw upon new emotional and technical skills. The article Winslow Homer: American Landscape Painter states,

“He made faithful sketches of the battle scenes and ordinary life in the camps. Although these did not get Homer much artistic recognition at the time the drawings, with their strong craftsmanship and realism are today considered to be among the best of America’s graphic arts.”

It was after the war that Homer created his now-infamous paintings that were inspired by what he had seen: Sharpshooter on Picket Duty and Prisoners from the Front. These two pieces were shown at the 1866 Paris Exhibition. During this year, Homer lived in Paris for about 10 months.

“Largely self-taught, Homer began his career working as a commercial illustrator. He subsequently took up oil painting and produced major studio works characterized by the weight and density he exploited from the medium. He also worked extensively in watercolor, creating a fluid and prolific oeuvre, primarily chronicling his working vacations. — Wikipedia

The Transition to Watercolors 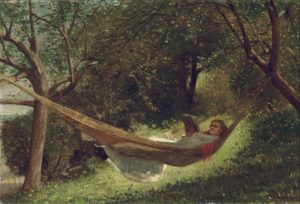 At the Civil War’s end, Winslow was a famous painter and illustrator. In 1876 he surprised his fans by totally giving up illustrating to fully pursue painting. Somewhere in this transition, the acclaimed artist began working with watercolors, which would become his signature medium. As his fascination with watercolors grew, he started depicting the Adirondacks, the coast of New England, the rivers of Quebec, the walls of Bermuda, and the Florida Keys.

“Winslow Homer said, ‘You will see, in the future I will live by my watercolors.’ Indeed, the success he achieved with these fresh and spontaneous works permitted him to stop working as an illustrator.” — Segmation

The American Spirit of Homer’s Paintings

Of all Homer’s works, his painting A Garden in Nassau (1885) is a representation of his best paintings. The Art Institute of Chicago described this piece as “a transparent watercolor with touches of opaque watercolor, rewetting, blotting and scraping, over graphite, on thick, moderately textured, ivory-wove paper.” The Institute delved deeper into A Garden in Nassau:

“Infrared examination of (the piece) reveals that the watercolor originally included two older boys perched atop the wall to the left of the wooden gate; they were attempting to reach the clustered coconuts on the other side. In this original composition, the small child standing in the path may have been stationed as a lookout for the two older children. Once the two figures were removed, the role of this youngster changed. In the final scene, focus is on the child’s wistful longing for forbidden fruit.”

Speaking of A Garden in Nassau, Wikipedia stated, “…his freshness and originality (depicted in this painting) were praised by critics but proved too advanced for the traditional art buyers and he ‘looked in vain for profits’. Homer lived frugally, however, and fortunately his affluent brother provided financial help when needed.”

On September 29, 1910, at 74 years of age, Winslow Homer passed away in his studio at Prout’s Neck. His painting Shoot the Rapids remained unfinished.

Are you impressed by the works of Winslow Homer? What would you say if someone told you you could recreate those very works on your Windows PC? Well, you can! With SegPlay PC, a digital paint-by-number computer game, you can “paint” Winslow Homer’s paintings on your Windows personal computer. Not just that — you can also print your artwork.

Get a free 10-day trial of SegPlay PC today.

To “paint” like Winslow Homer, check out our “Winslow Homer: American Landscape Painter” digital paint-by-number pattern. This pattern includes 27 of his most popular works, including…

Which of the Winslow Homer paintings featured in this article is your favorite? Share your thoughts with us in the “comments” section below.