The Most Artistic Theatre Set Designs in History 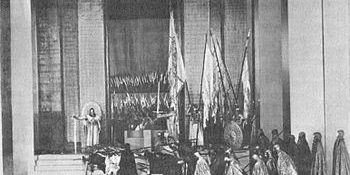 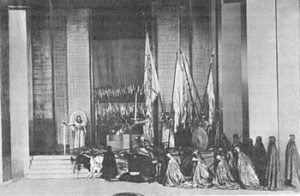 It’s undeniable that theatre set designs, which are the amazing backdrops for the sensational acting, singing and dancing that takes place during a show, can be works of art. Indeed, some can even take one’s breath away. Have you ever encountered a theatre set design that blew your mind and made your heart skip a beat?

Of all the incredible theatre set designs in history, there are several that stand out in excellence and ability to enchant spectators. The Most Artistic Theatre Set Designs in History, for example…

1. Hamlet (1912) – The set of Hamlet, designed in 1912, is simply breathtaking. Designed by Edward Gordon Craig and produced by Stanislavski, Hamlet took place at the Moscow Art Theatre. Concerning the set, “The sycophants of the court were to poke through the fabric (of Claudius and Gertrude’s cloak), their golden mantles reflecting on gilt walls; sliding screens would effect scene changes,” writes The Guardian’s Susannah Clapp.

2. An Inspector Calls (1992) – The set of An Inspector Calls was influenced by film noir and expressionism. On the set, “The precarious home of a bourgeois family was perched on stilts; its walls swung open like those of a doll’s house; its proportions were skewed, its inhabitants seeming to bulge out of it. Outside, children played in a bombed-out street. A drama that had been regarded as a theatrical warhorse suddenly looked politically urgent,” writes Clapp. This theatre set will send chills down your spine. It is truly not one you will ever forget. 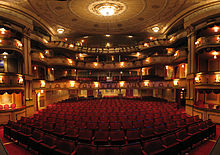 The Most Artistic Theatre Set Designs in History

3. Sunday In the Park with George (2005) – A favorite of many, Sunday In the Park with George was expertly expressed by designer Sam Buntrock in 2005. He chose to set the play in the Meiner Chocolate Factory, of all places. Susannah Clapp says that the set was “the first seamless blend of high and low tech.” She says, “Against an acid-green background, a white curtain was turned by video animation into a tree, washed with lime-coloured light, its branches picked out in dark strokes. Cartoon dogs capered on mini screens. Seurat’s painting came together as a background landscape, then as a framed object. The wit looked effortless.”

What theatre set design made a permanent impression on you? Have you encountered any set designs that amazed you? The Most Artistic Theatre Set Designs in History. Please share with us by leaving a comment!

When Art is Represented On Stage