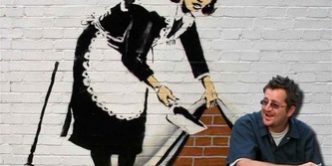 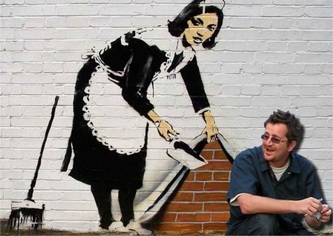 The streets of New York City are littered with street artists. Those who succeed at this trade often combine unique artistic ability with marketing efforts. Beyond taking time to create numerous works, they have to sell them too. This is not always easy. In fact, it is downright hard, even for a world famous artist.

While Banksy is not his birth name, art featuring this “tag” can be found decorating cities throughout the world. Beyond this talent, Banksy uses film and traditional canvas paintings to advance his position as a political activist. His satirical style, stenciling technique, and creativity lead to priceless masterpieces.

Of course “priceless” is an exaggeration. His work sells quite well, considering those who purchase it usually have to assume responsibility for cleaning it off the walls of city property. Yet the sliding scale of his work is drastic. A piece that sells for $249,000 in one venue may only sell for $60 in another.

This was the case when Banksy arranged for an anonymous sidewalk art booth be erected in New York City’s Central Park. A piece titled, “Love is in the Air,” was on the table, listed at $60. This summer, a limited edition of the same work sold in auction for a quarter of a million dollars.

Banksy hired a man to sit in front of the booth and sell art work. He recorded the day’s happenings and created a two and a half minute Youtube video. Throughout the course of the day, only $420 was earned.

Regardless of sitting in front of a sign that read, “Spray Art,” (which was painted in Banksy’s signature stencil print) no one knew the vendor was selling original artwork signed by Banksy.

The Value of Art

What can be gained from the experiment in Central Park? Nothing, according to Banksy. He does not admit any motivation behind this stint. Instead, he describes the act with the following statement:

“I know street art can feel increasingly like the marketing wing of an art career, so I wanted to make some art without the price tag attached. There’s no gallery show or book or film. It’s pointless. Which hopefully means something.”

But this display was not pointless. It says something about the value of art. More so, it reinforces the saying, “you better shop around.” A few lucky people got one heck of a deal that day.