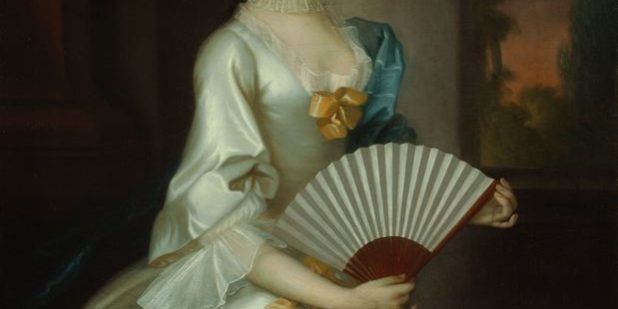 Portraiture has existed for thousands of years. Up to the fairly recent past, only notable individuals who were either noble or wealthy had their portraits made. Also, portraits of religious figures were readily created. Artists painted, sketched or sculpted their subjects.

“In Europe, kings and queens had their own court painters, charged with painting the royal family and their various associated servants and attendants, as well as ‘history paintings’ depicting historical events and figures such as important generals or leaders from bygone eras,” stated The History of Portraiture. 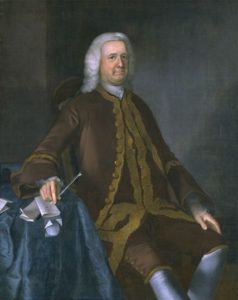 Portraiture has helped shape society throughout the ages. Famous historical portrait artists include:

Blackburn, while not as famous as some of the artists on this list, certainly made his mark on art history. Read on to learn about his life and work. 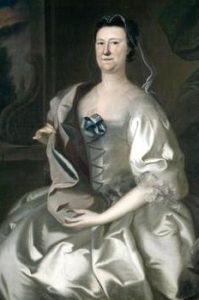 Blackburn was probably the son of a painter, who may have taught him the skill. He likely born in London but migrated to Boston where he probably maintained a studio somewhere around the timeframe of 1750-1763 that was patronized by colonial families having the funds to pay for his services. (He also spent time in Newport and Portsmouth.) Notable early American families who ordered portraits from Blackburn included:

Today, most of Blackburn’s paintings are privately owned at households in Boston, though some are housed at the public library of Lexington, Massachusetts, as well as various art institutions.

The Artistic Style of Joseph Blackburn 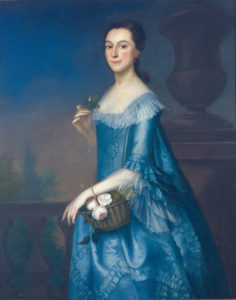 Artistically, Joseph Blackburn had a style that differentiated him from other portrait artists of his time, such as Robert Feke, John Smibert and Joseph Badger. First, he was excellent at recreating various textiles with paint, which leads scholars to believe he was trained as a drapery painter. Second, “Blackburn…introduced lavish costumes, garden settings, and jewels that exceeded his sitters’ actual possessions and that reflected their presumed tastes and desires rather than their real circumstances,” stated the article Joseph Blackburn (Active 1752-1777).

Blackburn’s portraits were and are, in a word, elegant. Also, his style included “the idealization of female beauty, the introduction of fanciful settings and costumes, and the exaggeration of his wealthy sitters’ possessions and estates—(and) emphasized artifice over realism,” wrote a contributor to Early American Paintings

Why Blackburn Left America for London

In 1763, Blackburn left America for London, where he painted in various locations in England, Wales and Dublin. A possible motive for this is one not uncommon to artists: jealousy.

“John Singleton Copley was Blackburn’s pupil, and it is said that he finally left his studio in Boston through jealousy of Copley’s superior success. His pictures were long attributed to Copley,” stated Wikipedia. “Now, thanks to evidence found within records held in our collections, we are able to confirm that Joseph Blackburn lived and died in the city of Worcester. He and his family lived in Broad Street in the parish of St. Nicholas. The exact date they moved there is unclear, but he certainly was a resident in 1768. They also leased properties around St. Martins Gate in the city, including The White Horse Pub. Joseph inherited the lease for the properties after his father, Joseph Blackburn, gentleman, of Kinfare, (now Kinver), Staffordshire, and possibly his aunt, Henrietta Blackburn of Worcester, died in 1759.”

“Joseph’s skills as a painter are shown by his treatments of textiles, including silks, laces and fabric folds.” — Segmation

What Was Happening in Colonial America While Joseph Blackburn Lived There? 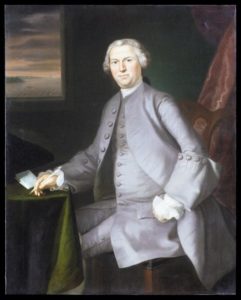 Many exciting things were happening in colonial America during the time Joseph Blackburn resided there. For example, in…

Colonial America was a lively place to inhabit. Depending on the precise year he left for London, Blackburn, a Boston resident, may have been a direct observer of the Boston merchants who would not buy English luxury goods after the Sugar Act was passed. Who knows the artistic inspiration colonial life bestowed on Joseph Blackburn.

Recreate the Artwork of Joseph Blackburn on Your Windows PC 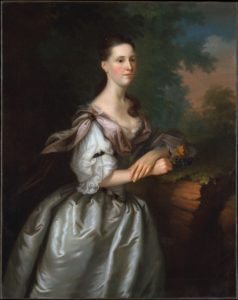 Love all things art? If so, SegPlay PC was designed for you. In SegPlay PC, paint-by-number meets modern technology in a user-friendly and intuitive computerized program developed specifically for Windows 10, Windows 8, Windows 7, Vista, XP and Windows 2000.

There are dozens of digital paint-by-number pattern sets compatible with SegPlay PC. The Joseph Blackburn pattern set includes several of the artist’s most renowned portraits, including those of:

Get a free demo of SegPlay PC and download the Joseph Blackburn pattern set to begin recreating his works of art on your Windows PC.

The Gift Joseph Blackburn Gave Us

Thanks to Joseph Blackburn, we are blessed with a peek inside early American life. It’s amazing to think that without his work, many faces would have never been captured in time.

Blackburn didn’t just do a service to his patrons, but also to their descendants as well as thousands of art lovers, including those yet to be born. Truly, artists are servants to humanity.

Politics Aside, the Life of an Artist – George Romney – English Portrait Painter
February 23, 2015

The Style and Poise of a Colonial American Portrait Painter
April 3, 2014