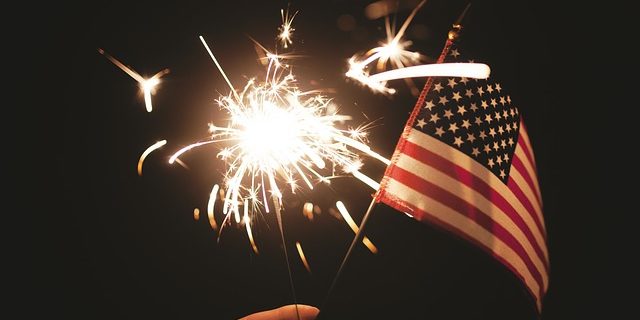 Since 2000, red has been the color of conservatism and blue the shade symbolizing liberalism. However, this coloring of the states began many years before.

Have you ever wondered why red represents Republicans and blue represents Democrats? If so, read on.

The History of the Colors of the U.S. Political Parties

The history of the colors of the U.S. political parties is rich. According to the article The Color of Politics,

“It got started on TV, the original electronic visual, when NBC, the first all-color network, unveiled an illuminated map — snazzy for its time — in 1976. John Chancellor was the NBC election night anchor who explained how states were going to be blue if they voted for incumbent Republican Gerald Ford, red if they voted for Democratic challenger Jimmy Carter.”

While the idea of colored states got started in 1976, it wasn’t until 2000 that states were definitely referred to as “red states” and “blue states,” and its roots are linked to the Civil War. For example. texts and reference books used blue to represent the Republican party since blue was the color of the Union in the Civil War. “Blue is also typically associated with the more conservative parties in Europe and elsewhere,” wrote a contributor to NPR.

Interestingly, up to about 30 years ago, red represented Democrats whereas blue was the color of Republicans. “The choice of colors reverses a long-standing convention of political colors whereby red symbols (such as the Red Flag or Red Star) are associated with left-wing politics, and right-wing movements often choose blue as a contrasting color. Indeed, until the 1980s, Democrats were often represented by red and Republicans by blue,” stated Wikipedia.

In 2000, journalist Tim Russert coined the terms “red states” and “blue states” on television during the Presidential election.

“Not a few Americans see this (coloring of the whole states) as a symptom of a real disease in the body politic, an imbalance in favor of conflict that makes compromise more difficult.” — NPR

Is Television Responsible for “Red States” and “Blue States”?

The terms “red states” and “blue states” weren’t officially established until the televised election of 2000 and would never have taken without the powerful medium of television. TV has affected so many aspects of American culture — this is just one.

What Color Represents Your Political Party?

Are you red, blue, or somewhere in between? Share the color that represents your political party with us in the section below.