Red and Green are an Unlikely Pair 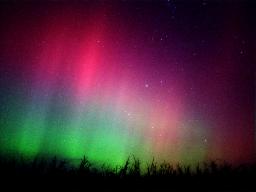 Entering the holiday season, festive color combinations will soon be everywhere. Pine trees should be adorned with red ribbon and missile toe will layer green leaves upon berries. But in nature, the colors green and red are rarely seen together. This is not because of any earth-wide grudge that exists between the colored pair. The atmosphere seems to want it this way.

Earlier this year, a solar storm hovered over the planet. People in regions far north of the equator were able to experience a magnificent sky, bold with color. Aurora Borealis, or Northern Lights, occur when a number of factors line up.

It is common to see auroras feature green waves breaking throughout the sky. This year, however, in New Zealand, one man photographed a red aurora.

Red is said to be a rare shade for aurora lights. Tony Phillips of SpaceWeather.com says, “Red auroras occur some 300 to 500 kilometers above Earth’s surface and are not yet fully understood.” There are some reasons why researchers believe the red aurora is so rare. Philips indicates is may be because, “…red lights may be linked to a large influx of electrons. When low-energy electrons recombine with oxygen ions in the upper atmosphere, red photons are emitted.”

Another reason why red auroras are rare is because it is hard to predict when this natural phenomenon will occur.

Minoru Yoneto photographed the red aurora in New Zealand on Oct. 2, 2013, but most of the time auroras reflect shades of green and sometimes purple.

The solar storm that took place in early October could be seen from many parts of the world, including “as far south as Kansas, Ohio and Oklahoma.” Most of the time, seeing Northern Lights requires a person be situated in a northern climate.

An article by CNN states that, “The best chance to see the Northern Lights will be somewhere between 66 to 69 degrees north – a sliver of the world that includes northern Alaska and Canada and bits of Greenland, northern Scandinavia and northern Russia.”

Those who want to see green and red collide may have to travel even further north – this color combination is said to be most prevalent in the North Pole.

Can Certain Colors Attract the Opposite Sex?
May 12, 2015