Politics Aside, the Life of an Artist – George Romney – English Portrait Painter 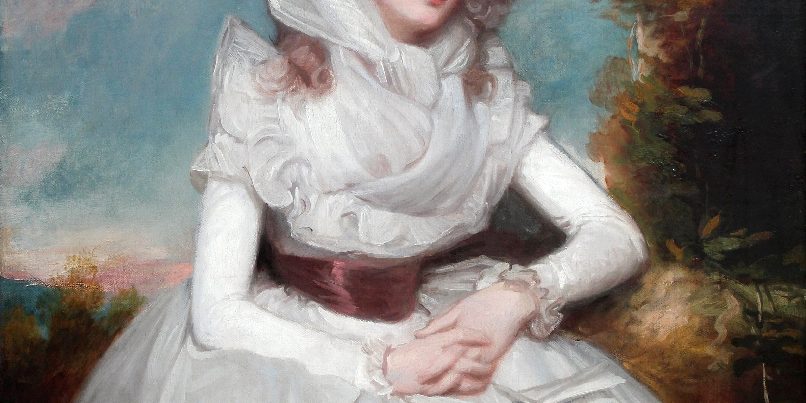 Long before becoming politicians and business tycoons, the Romney family made its name in art. According to “The Ancestors of Mitt Romney,” George Romney (1734 – 1802) was the first cousin of Miles Romney, who is an ancestor of the two-time presidential candidate. 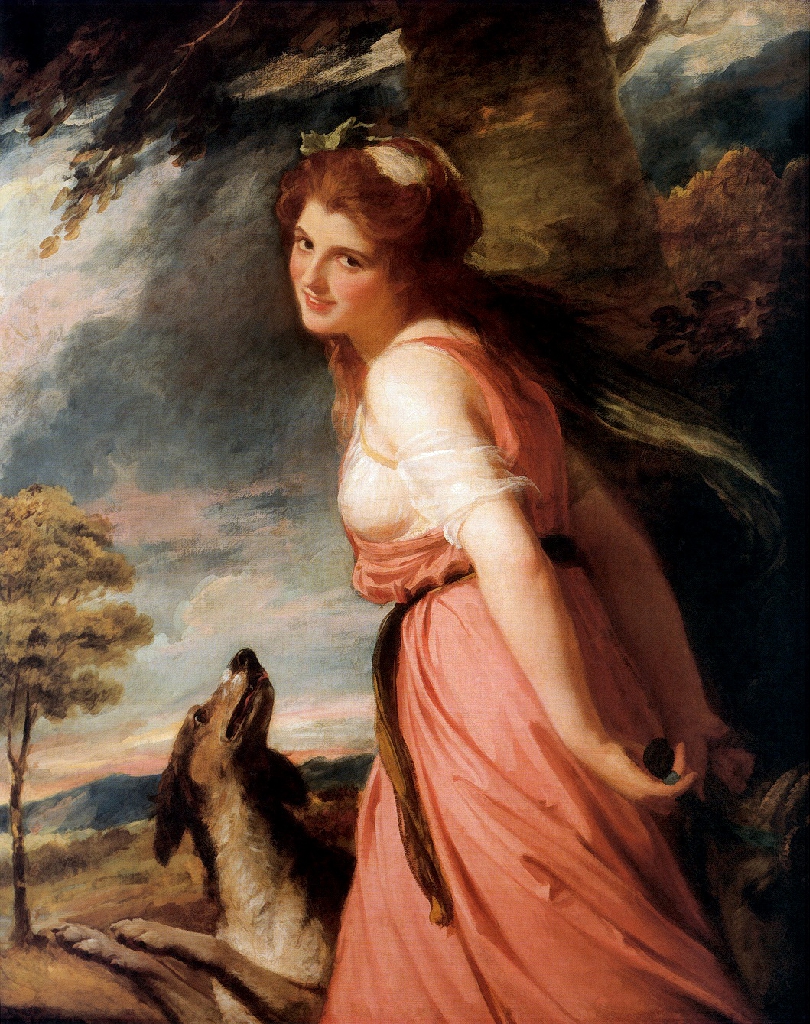 Different from his 21st century relatives, George Romney was rather private. Little is known about his personal thought life or political opinions. Nevertheless, he has been etched into history books as a high society portrait painter. In fact, many of his followers believe that if it weren’t for the almighty dollar (or, guineas to the Lancashire native), he could have been a painter who completed whimsical scenes inspired by Shakespearean literature and mythical gods. But long before he began exercising his potential as an artist, George Romney had to grow up and find his footing in his chosen career.

George Romney was third born in a family of 11 children. His father, John, was a cabinet maker. George left school to apprentice with John at the young age of 11. Born and raised in Dalton-on-Furness Lancashire, Romney was 21 when he set out to apprentice with Christopher Steel, a local painter in Kendal. For the next two years, from 1755 – 1757, Romney painted small, full-length portraits. During his time there he married Mary Abbot, the daughter of a landlady.

In 1762, Romney left Kendal to travel north where he could paint portraits for money. He left his wife and children at home but sent them financial support and visited them on occasion.

Shortly after landing in London, his 1763 historical painting, The Death of General Wolfe, was awarded a premium from the Society of Arts. Still, he continued to paint portraits as a way of earning a living. 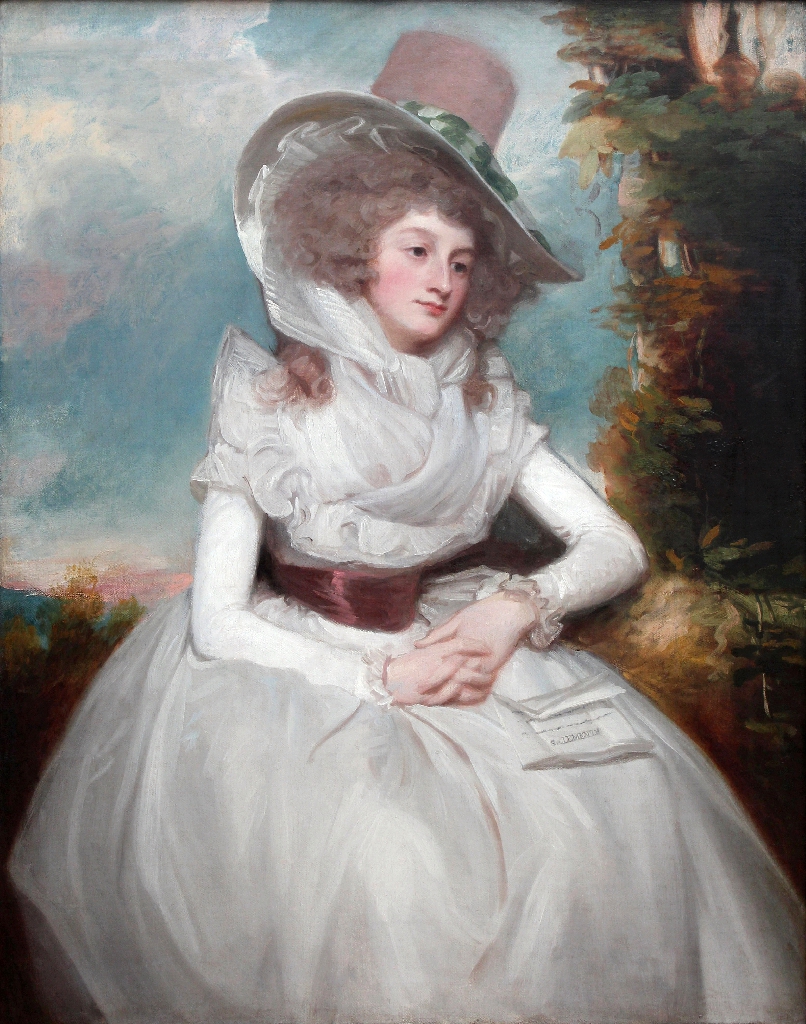 Romney’s travels continued on to Paris in 1764, where he studied the antique classicism of Eustache Le Sueur’s work. Then, from 1773 – 1775 he landed in Italy. Much of his time there was spent in Rome studying the frescoes of Raphael, as well as the work of Titan and Correggio in Venice and Parma. Also, throughout this time his artwork was on exhibition at the Free Society and Society of Artists in Great Britain. Upon returning to London, the Duke of Richmond became a regular client of Romney’s, which may have been a factor in his increased notoriety and speaks to the wave of notable society portraits he completed between 1776 and 1795.

Ultimately, Romney’s time spent touring benefited his work by maturing his art and broadening his abilities. He was known as a “fashionable portrait painter” throughout English society. Those who sat for him were flattered by the subtle qualities he emphasized to make them look their best. Rather than relying on color, Romney used lines to complement the men and women whom he posed in sculpturesque stances. This was especially evident in his portraits, Mrs. Cardwardine and Son (1775), as well as Sir Christopher and Lady Sykes (1786).

Romney’s artwork received much praise from his admirers and was able to support him financially but unlike other successful artists, Romney did not dedicate much time to socializing with fellow artists. Part of this may have been due to him deliberately separating himself from artists of the Royal Academy. It has been said that Sir Joshua Reynolds (who served as President of the Royal Academy) was displeased by Romney’s high fame and low costs. Seemingly determined to avoid such politics altogether, Romney’s sensitive and thoughtful nature led him to befriend people in philosophical and literary circles.

In the early 1780s, Romney met Emma Hart (also known as Lady Hamilton). Emma was said to be Romney’s muse because she appeared in a divine state in more than 50 of his paintings. His paintings of Emma strayed from his path of portraiture, and it is believe she was the muse that allowed him to enter an imaginary world. Romney painted Emma in settings “ranging from a bacchante to Joan of Arc.”

Throughout the last decade and a half of his career, Romney became even more enthralled with historical paintings. During this time he supported the Boydell’s Shakespere gallery and contributed one of his non-portrait paintings, The Tempest.

Towards the turn of the century, Romney’s health began to fail. In 1799 he returned to Kendal and reunited with his family. There, his estranged wife of over 40 years nursed him in his final days. George Romney died in Kendal and was buried in his birthplace of Dalton-in-Furness in November 1802.

Today, portrait painter George Romney has a legacy apart from his successful ancestors. The Romney Society believes there are “…2000 paintings and about 5000 drawings, scattered through 23 countries, on view in fifteen countries….” Over two centuries later, George Romney’s art lives on, as does the name he made famous.

However, this post is meant to recognize his artist style and some major pieces. For those who want to read more of Romney‘s story, visit this link: https://www.segmation.com/products_pc_patternset_contents.asp?set=ROM . Also, Segmation is proud to offer 35 digital George Romney patterns. By downloading these paint by numbers masterpieces, you can emulate one of the most fascinating artists who ever lived.

Enjoy the 35 George Romney –English portrait painter patterns . Segmation has for you and continue to learn and celebrate the life of a great artist.