There are still mysteries to uncover about the Italian Renaissance artist, Piero della Francesca. In fact, scholars have not yet come to a unanimous conclusion

about when Piero was born, nor do they agree on whether or not he had gone blind prior to his death in 1492. Though he was painting during the same time period as many other famous and well known painters, Piero’s work has not found its way to the spot light until recently.

The reason for the lack of information surrounding Piero’s work, as well as his recent popularity, is largely due to the fact that many of his paintings, and many of the buildings he painted in, have been destroyed. What is known about Piero della Francesca is that he was not only a talented painter, but a man deeply interested in mathematics. It is this love of mathematics and its influence on his painting that sets Piero apart as one of the greatest Early Renaissance artists.

Piero della Francesca was born in modern day Tuscany, then known as San Sepolcro. His father was a tradesman and his mother’s family was part of the Florentine and Tuscan Franceschi noble family. Throughout his life, Piero was always tied to San Sepolcro. However, much of his life was spent traveling and he spent time working in Rimini, Arezzo, Ferrara and Rome.

Around 1439 Piero traveled to Florence to assist Domenico Veneziano in painting the chapel of Santa Egidio. It was here that he most likely came in contact with other well known painters and it is also probable that Florence was responsible for his deep interest in achieving accurate perspective in his painting. Florence would have afforded Piero the opportunity to study light and color in the work of other painters; lessons that became foundational to Piero’s style of painting.

Florence might also have been responsible for Piero’s interest in mathematics as well as other forms of art such as, architecture and sculpting. Many scholars believe that Piero was deeply interested in how other fields of study might influence his painting. Whether or not Florence was where this interest was sparked, it appears that Piero spent his life studying mathematics, light, color, architecture and sculpture, all in the effort to bring the proper perspective to his painting. This love of learning for the sake of perspective in his work is evident in all of his paintings.

Piero mainly painted religious works that are noted for their tranquility and precision. His paintings are characteristically full of bright colors and light. In addition, Piero made a habit of painting both architecture and sculptures.

His most famous work is “Story of the True Cross” which is a series of frescos he painted for the Bacci Family in Arezzo around 1457. These frescos demonstrate that Piero was a master at manipulating light in his paintings. As in many of his other paintings, these frescos appear three- dimensional because Piero combined shadow and shade to create depth.

“The Flagellation of Christ,” painted during the 1460’s in Urbino, is evidence of Piero’s love of architecture, but is also another example of how he utilized light in his paintings. In this painting Christ is essentially in the background yet, Piero manages to draw the eye towards Christ by manipulating the light and colors within the painting. 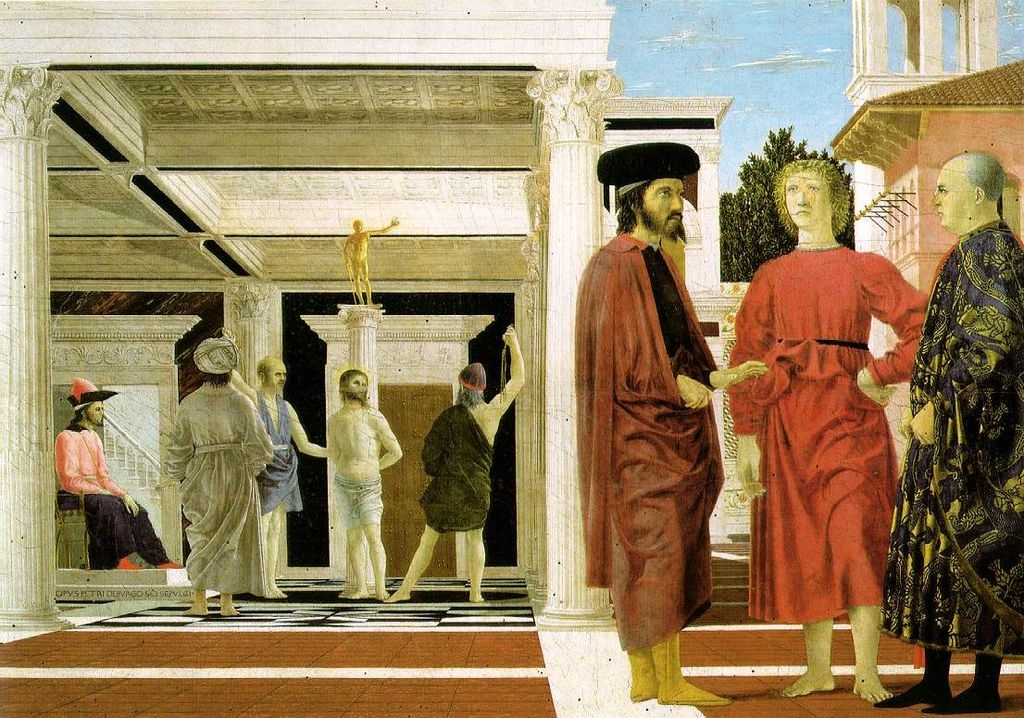 The “Baptism of Christ” offers an excellent example of Piero’s love of geometry. Each figure in the painting serves to balance the whole. Here again, light and color are used to draw the eye, as well as balance the painting.
Piero also painted portraits that are marked by their realism and sophistication. The background scenes of these portraits are often intricately detailed. Yet, as with all of Piero’s work, these details serve to draw the eye to the subject of the piece rather than overshadow. His paintings are known for the detailed backgrounds; for the care he showed towards aspects of paintings that the eye might never be drawn to.

In 1492, Piero della Francesca died in his home in San Sepolcro. He left his mark on the world in the form of paintings full of light and color and work infused by his knowledge of mathematics. He also left behind a series of treatise that mathematicians still recognize today. For this, Piero della Francesca will remain one of the most appreciated Early Renaissance artists.

Have fun and relax with beautiful online painting art. So fun and easy to use with no mess but just a mouse!
Be a Artist in 2 minutes with Piero della Francesca – Early Renaissance Artist from Segmation SegPlay® PC (see more details here)