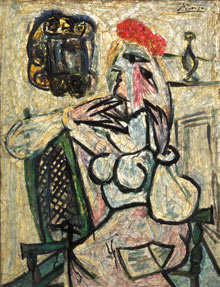 Pablo Picasso is certainly one of the most famous artists who ever lived. His name is one that is recognizable by laypeople as well as art enthusiasts, and his pieces of artwork sell for millions upon millions of dollars. Indeed, Picasso is a household name that can be found in any art history textbook. All these reasons make the recent finding of one of Pablo’s works something to celebrate.

“Seated Woman with Red Hat,” a painting created by Picasso himself, was found in the attic of the Evansville Museum in Indiana. Given to the museum in 1963, the piece was stored in the attic after being wrongly catalogued. For about 50 years, the painting was thought to have been created by an artist named Gemmaux, thus was the piece kept in an obscure place. The significant point is Picasso’s name is reportedly quite evidently signed in the top right corner of the piece. Why is it, then, that the painting was claimed to have been created by Gemmaux and not Picasso?

Art historians attributed the painting to Gemmaux because the piece was “described in documents as a ‘Gemmaux.’” But the truth is Gemmaux is not a person; it is an art medium. Now believed to be a plural form of the word “gemmail,” gemmaux actually means the assemblage of glass pieces. (It is thought that Jean Cocteau taught this medium to Picasso sometime during the 1950s.) Since museum workers were not aware of the name in the upper right corner of the painting, they assumed it was crafted by “Gemmaux,” the artist we now know does not exist.

The Evansville Museum staff discovered the true painter of Pablo Picasso’s “Seated Woman with Red Hat” after Guernsey’s informed them of a research project it was initiating. Guernsey’s was researching Picasso’s “gemmaux works.” It was at this time that “Woman Seated with Red Hat” was reevaluated and pronounced a true Picasso piece.

As one might imagine, “Woman Seated with Red Hat” quickly went from being worth no considerable amount of money to having an unbelievably high value. Housing a painting of such value would undoubtedly cost the Evansville Museum. It is for this reason the museum has chosen to pass the painting on Guernsey’s.