China native Cai Gou-Qiang has exploded the conventional rules of art with his firecracker productions and visual art pieces.

You may recognize the name, Cai Gou- Qiang from the 2008 Olympics. Cai was the mastermind behind all special effects for the opening and closing ceremonies. He is recognized all over the world for his ability to create breathtaking firework displays. While many people can light firecrackers, only few can orchestrate such awe inspiring scenes.

Are you wondering how he acquired such a fascinating and seemingly dangerous talent?

It all began when Cai was young. Fireworks were easily accessible and he played with them often. The fun soon turned into an artistic experiment. However, Cai couldn’t have achieved such heights of success without a few errors.

His first attempt to create art using firecrackers came from his curiosity to see what would happen if he simply fired a rocket into a canvas. As you can imagine, this process only served to burn the canvas to pieces.

On Cai’s second attempt he removed the gunpowder from firecrackers. He then arranged the gunpowder on a blank canvas and lit it. The effect was stunning. It created an art form all its own.

Since then, Cai and his adventurous style of art continue to gain popularity. He has literally exploded conventional rules of art and how it can be created. Cai’s images of space, nature and time are supernatural in their fiery distortion. 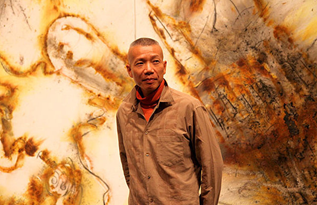 For Cai, this artistic journey has been a personal one. His style serves to break conventional rules, and the world recognizes the uniqueness he brings to the art community. For Cai Gou- Qiang, this style of art is suspenseful and rewarding. He enjoys the adrenalin pumping process of working hard and hoping his pieces will turn out. You can bet, his audience agrees. Nothing can diminish the beauty or the sheer emotional thrill of watching Cai’s firework displays. Likewise, his gunpowder designs are just as intriguing and mesmerizing.

The artist, now 54, resides and works in New York.

Everything You Need to Know About Paint-by-Number
December 5, 2017

How Paint-by-Numbers United a Community
August 25, 2017