3 Works of Mermaid Art That We Love 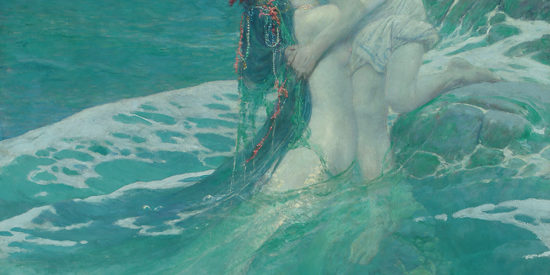 “I love the rain be cause I am a mermaid who lives far from the sea.”

These are just a few mermaid-themed sayings that are currently gracing t-shirts, mugs, home decor, and more. To say that mermaids are popular is an understatement. But is this mermaid obsession something new or has it always been around? Mermaid-themed art of old would suggest that people have always been fascinated by this siren of the sea.

“The sea, once it casts its spell, holds one in its net of wonder forever.” — Jacques Costeau

Mermaid art tells stories of mythical creatures that are radiant with beauty and brave enough to graze the ocean floor. It awakens something wild and otherworldly in us. And it makes us want to hit the beach as soon as possible.

There are many pieces of mermaid art lovely enough to stir the soul. Read on to discover our three favorite.

A few pieces of mermaid art we are currently in love with include: 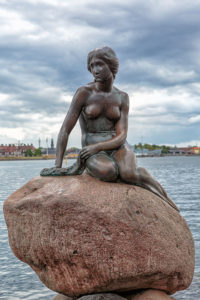 1. The statue of Hans Christian Andersen’s Little Mermaid — Disney’s “The Little Mermaid” is an iconic film, though the plot strays from the original fairytale written by Danish author Hans Christian Andersen in 1837, which was initially conceived as a ballet. The tale gained such acclaim that sculptor Edvard Erikson expertly crafted the sea siren from Andersen’s tale. She resides on a rock located in the Copenhagen harbor.

2. The Mermaid by Howard Pyle — We think one of the most captivating renderings of a mermaid was painted by artist Howard Pyle in 1910. Most people are unaware that Pyle “invented our modern visual concept of a pirate, and inspired such artists as Norman Rockwell and Hal Foster,” according to 11 Famous Mermaids and Their Creators. “Though it appears complete, the 1910 painting was left on the easel prior to the artist’s last trip to Europe, and only partially finished by a student after he passed away in Florence.”

3. The Fiji Mermaid — If you want to be spellbound (and a little creeped out), you must research the infamous Fiji Mermaid. The creature made front-page news in 1842 when the dried specimen was brought to New York City by Dr. J. Griffin, who was a member of the British Lyceum of Natural History. It was showcased by P.T. Barnum that very year and garnered a great deal of attention. Sadly, it disappeared shortly after its journey to the United States. It was probably burned up in one of the fires that destroyed P.T. Barnum’s curiosities.

The creature was not beautiful. It had the torso and head of a juvenile monkey. These parts were sewn to the back half of a fish. The resulting work of art resembled a grotesque-looking mermaid’s remains. Supposedly, this mermaid was caught near the Fiji Islands.

Which of these works of art is your favorite?

“Paint” the Waves on Your Windows PC

Ocean-lovers and mermaid fanatics alike love our digital paint-by-number pattern ‘Beach Fun’. This ocean-inspired pattern set is compatible withSegmation SegPlay PC, the original digital game that allows you to “paint” scenes from nature, as well as recreate famous works of art by artists like Leonardo da Vinci and Rembrandt, on your Windows PC.