Why Have So Many Female Artists Been Left Out of Art History?

Art history textbooks are nearly void of female artists. Is this because female artists were rarities in the past? Not hardly. Just as there is a large number of women artists in the here and now, there was probably a huge amount in the there and then. The question is “why are women artists getting left out of art history?” It’s critical that we find the answer to this quandary. Without it, history may repeat itself as it relates to women in the arts.

4 Female Artists You Don’t Know About, But Should 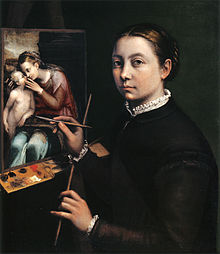 Have you ever heard of Angelica Kauffman? How about Sofonisba Anguissola, Victorine Meurent, or Suzanne Valadon? These are the names of some pretty amazing artists from the past. Because these artists were women, their names are unrecognizable to the majority of people.

To set the record straight, Kauffmann was a Swiss Neoclassical painter who enjoyed a successful career in Rome and London. Anguissola was an Italian Renaissance painter, specifically a court painter for King Philip II. Meurent, one of Manet’s muses, was a French painter who routinely exhibited at the Paris Salon. Valadon was the first female painter to be admitted to the Société Nationale des Beaux-Arts.

So are we. Too bad most of us didn’t learn about these ladies in school while we were memorizing the works of Monet and Da Vinci.

Why Have Women Artists Been Excluded from Art History?

Talented female artists deserve to be in our children’s and grandchildren’s art history textbooks…so why aren’t they? Art News offered an answer, stating,

“In the field of art history, the white Western male viewpoint, unconsciously accepted as the viewpoint of the art historian, may—and does—prove to be inadequate not merely on moral and ethical grounds, or because it is elitist, but on purely intellectual ones.”

The Guardian put its two cents in, quoting Annie Kevans: “For hundreds of years there was this very strong control over the canon and [the male-dominated establishment] didn’t want women written into it.” Many other notable publications have attempted to answer this complicated question.

It seems as though female artists have been left out of art history for the simple reason that their work wasn’t valued as highly as that of their male peers. That’s the bad news. The good news is that we can change that, starting today. We can teach our kids and grandkids about Angelica Kauffman, Sofonisba Anguissola, Victorine Meurent, and Suzanne Valadon. And, modern women artists can rise to the high calling of putting their artwork in the world’s face until it truly recognizes its value. If that takes another hundred years, so be it.

What steps do you think should be taken to mitigate the where-the-heck-are-all-the-women problem that riddles our written and verbal communications concerning art history?

Read more Segmation blog posts about women in the arts: