The Life and Work of Spanish Painter Joaquin Sorolla

There is much to be said for a humble artist with a good deal of talent. Such an individual can go far in his or her career. However, people like these are and always have been rare. When the world discovers this type of person, he or she is often placed high on a pedestal. Interestingly, this is probably the last place a humble artist would want to be. But, when this happens, it seems to either steal childlike humility or inflate a person, sometimes to the point of corruption. Joaquin Sorolla was an artist who, given the option to paint anything, chose humble subject matter. He was exalted by a career that many artists would give anything for. Still, he was able to find the beauty in what others would call unlovely. Read on to learn more about the heart, soul, life, and work of Spanish painter Joaquin Sorolla.

Joaquin Sorolla y Bastida was born in Valencia, Spain on February 27th, 1863. A year later, Sorolla’s parents gave Joaquin a sister, Concha. Tragically, both parents died when the Sorolla children were babies. It is thought that cholera was responsible for their deaths. Soon after the death of their parents, Joaquin and Concha were taken in and raised by their maternal aunt and uncle.

Sorolla Was Blessed with a Formal Education in Art

Not much is known about what type of parents Sorolla’s aunt and uncle were to the two young children. But one

thing is known – they were wise and caring enough to ensure that Joaquin developed his artistic gifts. When he was just nine years old, he began receiving instruction in art (he lived in Valencia at this time). At age fifteen, his talent earned him an opportunity to study at the Academy of San Carlos in Valencia. Three years later, he began studying master paintings in the Museo del Prado. Sadly, he was forced to lay his artistic passions aside for a time and join the military. “After completing his military service, at twenty-two Sorolla obtained a grant which enabled a four-year term to study painting in Rome, Italy, where he was welcomed by and found stability in the example of F. Pradilla, the director of the Spanish Academy in Rome. A long sojourn to Paris, in 1885 provided his first exposure to modern painting; of special influence were exhibitions of Jules Bastien-Lepage and Adolf von Menzel. Back in Rome he studied with José Benlliure, Emilio Sala, and José Villegas Cordero,” stated Wikipedia.org’s article Joaquin Sorolla. After this exciting season of artistic growth, Sorolla made a trek back to his hometown of Valencia to be married to his sweetheart, Clotilde García del Castillo. He had known Castillo for nine years and spent some time in his youth working in her father’s studio.


In 1892, Sorolla released a painting called Another Marguerite. The painting won a gold medal at Madrid’s National Exhibition, and first prize at the Chicago International Exhibition. This was the world’s unofficial introduction to his work. Quickly after the release of Another Margeurite, Sorolla became a famous and sought-after artist. He was considered the head of the modern Spanish school of painting. 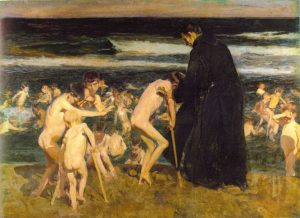 In 1892, Joaquin Sorolla rose to a level of success he’d likely never thought possible. But, it was 1899 that was a true year to remember for him—the year he painted his most notable work, Sad Inheritance. My Daily Art Display featured an article about Sad Inheritance. The article said, “The subject matter of the painting Sad Inheritance is a party of crippled children bathing at the sea in Valencia under the watchful eye of a monk. It was in the late nineteenth century that a polio epidemic struck the Valencia area and in the painting one can see two of the boys affected by this affliction. The painting was in tune with Sorolla’s desire of capturing the immediacy of everyday life, warts and all. This is often termed Social Realism. Social Realist artists try to illustrate people and their lives in a realistic way and because of this it is often the case that people in their paintings are not continually shown as beautiful, attractive and happy.” It’s quite possible that Sad Inheritance revealed Sorolla’s heart. Although he had the opportunity to paint any subject he could imagine, he chose the humblest of subjects. That tells us a lot about the artist’s values.

To say that Sad Inheritance was received well would be an understatement. The piece was the most acclaimed that Sorolla would ever produce. It won him the Grand Prix, and a medal of honor at both the Universal Exhibition in Paris and the National Exhibition in Madrid.

Later in his career, Sorolla was nominated to be a Knight of the Legion of Honour, became a member of the Fine Art Academies of Valencia, Paris, and Lisbon, and was a Favorite Son of Valencia. The article Joaquin Sorolla says, “A special exhibition of his works—figure subjects, landscapes and portraits—at the Galeries Georges Petit in Paris in 1906 eclipsed all his earlier successes and led to his appointment as Officer of the Legion of Honour. The show included nearly 500 works, early paintings as

well as recent sun-drenched beach scenes, landscapes, and portraits, a productivity which amazed critics and was a financial triumph.” On August 10th, 1923, the beloved Spanish painter from Valencia passed away.

In many ways, Joaquin Sorolla’s life was a like fairy tale. His career was a dream, his family life may have been enriching, and his legacy was and is enduring. Was it fate that made him so blessed, or was it his talent and work ethic? We like to believe that it was a little of both.

Are you a fan of Joaquin Sorolla? If so, no doubt you’d like to re-create some of his art. You can do this with SegPlay PC, our digital paint-by-number game. You’ll love digitally “painting” Sorolla’s works of art onto your Windows PC. Take a look at SegPlay PC and our Joaquin Sorolla pattern today!