You are here:
"out of the box" artcreativeLeonardo da Vinci 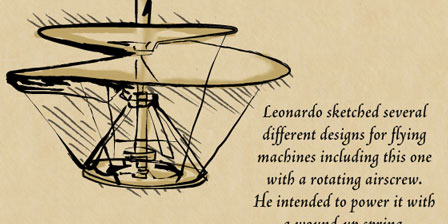 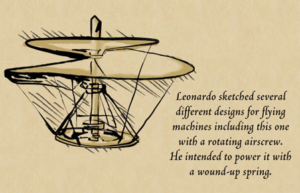 Like many artists, creative Leonardo da Vinci didn’t just consider himself to be a man of one concentration. One fascination of Leonardo’s was that of invention and design.

Throughout his life, creative Leonardo da Vinci had taken time to document ideas for inventions that intrigued and inspired him. He did this by sketching them in his journal. However, the ability to create prototypes and test each of these inventions went unrealized in his life. Unfortunately, Leonardo died before any of the world would know of his true genius. His works were scattered and lost, many of them not seen again for hundreds of years.

In the example above, taken from the Museum of Sciences website, we can see that Leonardo da Vinci had a vision for a flying vehicle nearly 500 years before the first manned aircraft would be designed and piloted by Paul Cornu in 1907.

In his drawings, it is easy to see creative Leonardo da Vinci dead on grasp of where the future of technology was headed. From tanks and parachutes, to diving and aircraft landing gears, Leonardo would touch upon them all in his pen and paper interpretations.

Was it because he was a supremely intelligent and enlightened human being, or that he had visions of a future far superior to our own? In any case we may never know, but it was likely a pairing of the two that lead him to jot down so many innovative and profound ideas.

It is startling to note how severely under noticed the conceptions went until the incredible discovery of some of creative Leonardo da Vinci works; drawings that would captivate the imaginations of so many throughout the world.

It is a lesson to us that an artist is more than artist, he is an instrument in the progression of the world and its many views.