Leonardo and Picasso: Artists of Their Times www.segmation.com 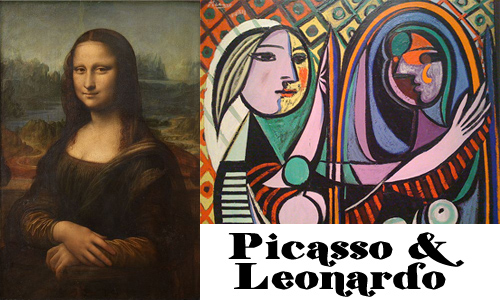 Leonardo da Vinci and Pablo Picasso are two of the most famous painters in history (if not the most famous); one a Renaissance genius renowned for his skillful realism, the other a modern legend and co-founder of Cubism.

Did you know that even though Leonardo’s Mona Lisa is the most famous painting in the world, he only produced less than 30 paintings in total? Even then, many of them were left unfinished. Picasso, on the other hand, created nearly 2000 paintings – plus sculptures, drawings, ceramics, and hand-pulled prints that combine to over 50,000 works of art! (To be fair though, Leonardo also left behind a substantial number of drawings, sketches, and pages full of notes.)

One reason for this vast difference in the number of paintings produced is that both artists were products of the times in which they lived. When Leonardo was alive, artists didn’t have the luxury of creating art for art’s sake. Instead they were commissioned by the church, guilds and wealthy patrons to create paintings and sculptures that were expected to depict certain themes. For this reason, Leonardo needed to find work where he could. During times of war, he had to work as a military architect and engineer, designing methods of defense. Making art took a backseat to the work necessary for survival.

By the time Picasso was born 362 years after Leonardo’s death, the world was a different place. Artists had more freedom than ever to paint what they wanted. Self-expression in art was more widely accepted and expected. Instead of being commission-based, most artwork was sold in galleries to private collectors, as money flowed more abundantly through society than it did during the Renaissance. By the 20th century, successful artists such as Picasso were able to sustain themselves from the sale of their artworks alone, and did not need to seek alternate forms of employment to make ends meet.

These factors may contribute to the reason why Picasso created so many more artworks than Leonardo, even though Leonardo is the creator of the most famous painting in the world. Who knows what more Leonardo could have accomplished if he’d been alive in modern times?