The early 1800s marked a time of significant change throughout France. The post French Revolution era came on the heels of the Industrial Revolution. At this time, political institutions and society at large were learning how to operate in a new age of evolved capabilities and lofty dreams, as well as an increased number of working poor and social upheaval. Art seemed to be the only answer to the twisted combination of confusion and excitement that plagued the century.

An artist who attempted to bring humor to the uncertainty was Honoré Daumier. Daumier was a versatile artist; he published political caricatures, made his living selling lithographs, and received praise for his impressionist paintings and life-like sculptures. Still, Daumier only experienced a small taste of success in his life. His talent was overshadowed by a greater need to earn money and stay true to his political convictions.

In 1808, Honoré Daumier was born in Marseille, France. After attempting to make his living as a poet, Honoré Daumier’s father, who moved his family to Paris in pursuit of fame and fortune, was financially broke. As a result, around 12 or 13 years of age, the soon to be artist dropped out of school and took employment at a bailiff’s office. He continued in the ways of proper employment as a bookseller’s clerk in the busy Palais-Royal area of Paris where he observed the differences of the people passing by the gardens. Inspired by their uniqueness, Daumier wanted to depict them with his art. 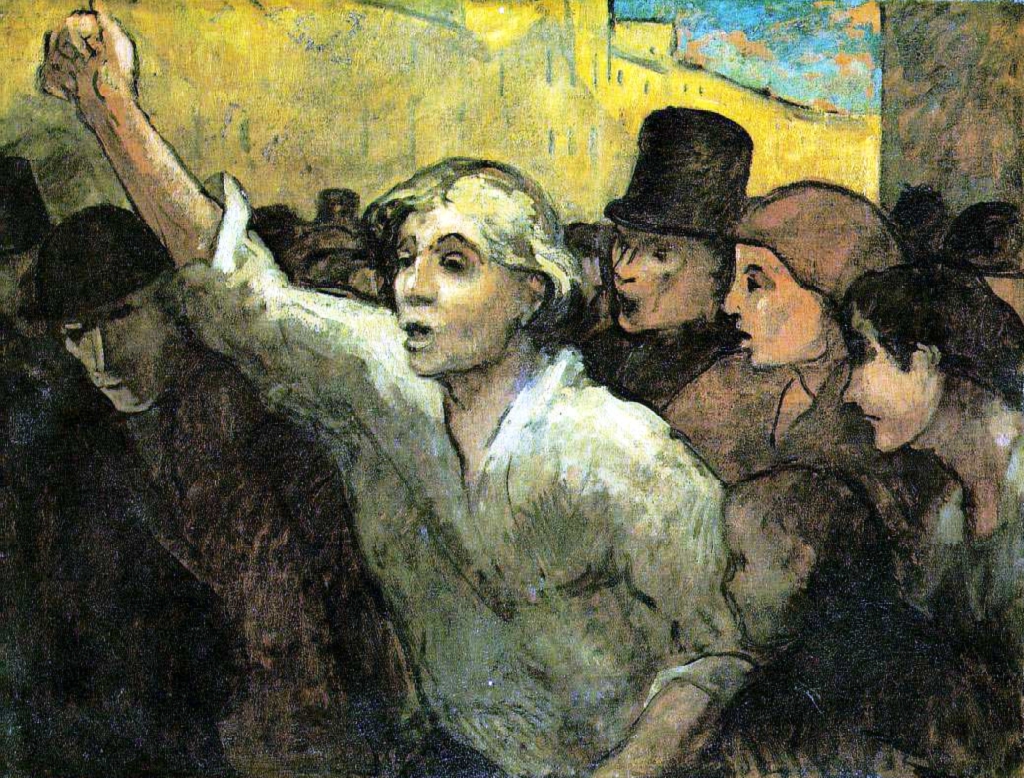 Daumier, at an age younger than 20, began learning about lithography. This became a useful skill that would provide him with income throughout his life. Yet, his artistic passion yearned to be able to express the people and social situations he took in each day. While he wanted to be artistic in ways of painting and sculpture, much of his time was dedicated to print-making.

Finally, in 1830, Daumier got some notoriety, as he began leveraging his marketable skills to produce caricatures for satirical publications. At this time, print publications attracted the attention of every person, from the king to a pauper. In 1832, King Louis-Philippe was disheartened by the anti-government cartoon, Gargantua, created by Daumier. The artist was sentenced to prison, and then a mental institution. This was the worst retribution the king demanded for an offending artist.

His imprisonment for this caricature marked the end of his punishments, but it did not stop him from publishing pieces of political satire. In fact, between the years 1830 and 1847 he specialized in producing lithography, cartoons, and sculptures. While he continued to work in these areas as a way of self-expression and to secure income, in 1848 there was a distinct shift in Daumier’s career. From 1848 to 1871 he thrived in an art form and style he was passionate about: impressionist painting. One reason for this change may have been the death of his 2 year old son. He and his beloved wife, Léopoldine or “Didine” suffered this loss around the time Daumier altered his artistic focus.

Honoré Daumier developed a number of talents within the sphere of art throughout his life. The context of his paintings also broadened. As he began pursuing naturalism, he depicted historical themes that highlighted the greatness of nature above men. In addition, he also used literary themes, and remained true to the subjects whom inspired him most—everyday Parisians. He felt as if true life provoked conversation about social topics of the day.

Although Daumier never made a commercial success of his art during his lifetime, he was appreciated by many. Those include: Eugene Delacroix, Edgar Degas and Jean-Baptiste-Camille Corot. In face Corot when Daumier was destitute and without shelter, bought him a cottage.

Towards the end of his life, Daumier dedicated much of his time to sculptures and paintings. His work was considered “ahead of its time” by modern critics who did not come to fully appreciate his work until after his death. In 1879, Honoré Daumier passed away. He was near blind and in debt at the time. It is rumored he was buried in a pauper’s grave. If his life’s work in caricatures indicates anything, it is that he wouldn’t have cared; he lived life depicting the poor, living among them, and dying their death as well. As a result, his art lives on today.

Can you relate to being an artist that is currently having small successes in life?

If you enjoyed this Segmation blog post, you are sure to love: