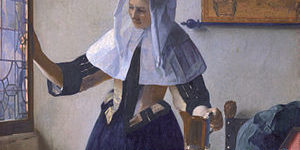 In the history of art, there has perhaps been no artist better at creating purity of light and form than Johannes Vermeer. His special ability to create light in paintings caused the Dutch painter to rise to fame, but not until long after his death. Today, only 36 of his works of art remain. This causes art lovers the world over to treasure them all the more. Indeed, the golden touch of Dutch Golden-Age artist Johannes Vermeer is evident in his surviving works of art. 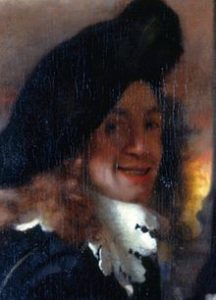 “The Procuress” — thought to be a self-portrait of Vermeer (wikipedia.org)

As far as we know, there was nothing remarkable about the early life of Dutch painter Johannes Vermeer. He was born on October 31st, 1632, in Delft, Netherlands. It was in Delft that he was destined to spend his artistic career, and what a career it was.

Born to a father who was both a weaver of fine fabric as well as an art dealer, Johannes did not come into the world with much wealth. However, by 1941 his family had purchased a large house on the market square. The house was used as an Inn and was called The Mechelen. When his father died in 1952, the Inn was left to Vermeer. By this time, the young painter had already set out on his path to becoming a professional artist and therefore didn’t maintain the family business.

A year after his father’s death, Johannes married a young woman named Catherina Bolnes, a fellow Delft-dweller. Because his wife was Catholic, Vermeer soon left Protestantism for Catholicism.

When Did Vermeer Decide to Become an Artist? Who Were His Artistic Influences? 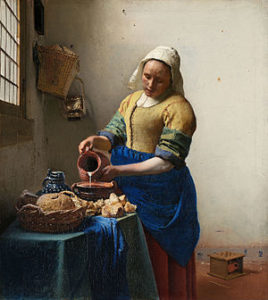 No one is sure when Johannes Vermeer decided to become an artist. But, what is known is that “he registered as a master painter in the Delft Guild of Saint Luke on December 29, 1653, but the identity of his master(s), the nature of his training, and the period of his apprenticeship remain a mystery,” wrote Arthur K. Wheelock in his article Johannes Vermeer. “Since Vermeer’s name is not mentioned in Delft archival records during the late 1640s or early 1650s, it is possible that, as with many aspiring Dutch artists, he traveled to Italy, France, or Flanders. He also may have trained in some other artistic centre in the Netherlands, perhaps Utrecht or Amsterdam.”

If Vermeer did travel to the places Wheelock mentioned, it’s likely that he would have met Gerrit van Honthorst, an artist who imitated Caravaggio, and Rembrandt van Rijn in Amsterdam. No doubt these artists would have influenced him as both a person and an artist.

Johannes Vermeer’s artwork is widely studied in higher education institutions around the world. In fact, it would be difficult to find an art textbook that does not mention Vermeer. Some of his earlier works include The Procuress, Diana and Her Companions, and Christ in the House of Mary and Martha. These pieces were obviously influenced by Rembrandt. It wasn’t until nearer to the end of the 1650s that Vermeer’s signature style began to emerge.

One of the first works that truly displays Vermeer’s personal style is The Milkmaid. Biography’s article Jan Vermeer stated, “This depiction of a woman in the midst of her work showcases two of his trademarks: his realistic renderings of figures and objects, and his fascination with light. Many of his works have a luminous quality, including the portrait Girl with a Pearl Earring (1665).”

Johannes Vermeer and Girl with a Pearl Earring in the Media 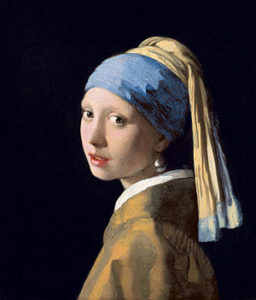 Over the years, mainstream media has tried its best to capture the story of Vermeer’s most famous piece of work, Girl with a Pearl Earring. This masterpiece was painted in 1665 and is a tronie of a young lady wearing a pearl earring and a blue turban. The Hague has housed the oil painting since 1902.

In 1999, author Tracy Chevalier wrote a fiction book titled after Vermeer’s prized work of art. According to Wikipedia, the book “(fictionalized) the circumstances of the painting’s creation. In the novel, Johannes Vermeer becomes close with a fictional servant named Griet (based on Chevalier’s close friend Georgia Kendall), whom he hires as an assistant and has sit for him as a painting model while wearing his wife’s pearl earrings. The novel inspired a 2003 film and 2008 play of the same name.” Colin Firth and Scarlett Johansson starred in the film, and it grossed over $31 million.

While Vermeer’s other works of art are popular, Girl with a Pearl Earring has a bewitching quality that draws people in, making them long to know the real story behind the art. Hopefully, Hollywood did the work of art, as well as the artist, justice.

The Final Years of Jan Vermeer 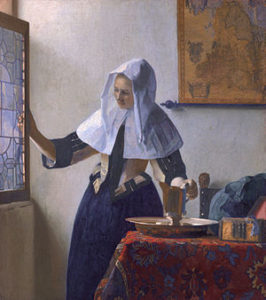 Vermeer struggled financially in his final years. After France invaded the Netherlands in 1672, the country’s economy faltered. As a result, Vermeer became indebted, as did many of his countrymen. His financial struggle continued until the time of his death. Thankfully, he continued to produce beautiful work despite his financial woes.

The mature works of Jan (Johannes) Vermeer “involved a delicate balance between observation and arbitrary design,” stated The Met. The Met mentioned that his mature works developed between The Milkmaid and Young Woman with a Water Pitcher. Young Woman with a Water Pitcher, currently housed at The Met, was painted in the Baroque style and provides an incredible example of Vermeer’s otherworldly usage of light. Learn more about this work of art in a fascinating video published by the Khan Academy.

On December 16th, 1675, the world lost the Dutch Golden-Age artist whose artwork possessed (and possesses) an indelible golden touch. Thankfully, several dozen of his pieces still exist, and we have the privilege and responsibility of respecting them and teaching the generations about them. Johannes Vermeer may be gone, but his works of art awash with his golden touch live on.

Thanks to modern technology, art lovers, specifically those who admire masterpiece paintings, can re-create Vermeer’s artwork on Windows PC via SegPlay PC. SegPlay PC is a paint-by-numbers computer program that makes it easy to re-create famous works of art and then print them. Also, we transformed 20 of Vermeer’s best-known paintings into detailed SegPlay PC patterns. We’ve include many portraits in the Vermeer pattern set, including The Geographer, The Lace Maker, The Girl with a Wine Glass, The Milkmaid, and Girl with a Pearl Earring. Download a FREE trial of SegPlay PC today, and take a look at our Vermeer patterns.

Which of Vermeer’s works of art is your personal favorite?

The Life and Work of Spanish Painter Joaquin Sorolla