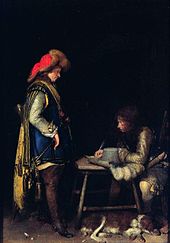 Gerard’s father, Gerard ter Borch the Elder, was an excellent artist in his own right. Seeing that his son shared his talent and affinity for art, Ter Borch the Elder took it upon himself to mentor his son as an artist. (Art was a family affair. Gerard’s sister was also a painter.) In 1632 the young Ter Borch was sent to Amsterdam to receive instruction from Pieter Codde or Willem Cornelisz.

Gerard ter Borch was chosen to be Pieter de Molyn’s apprentice while in Haarlem in 1634. During this time the burgeoning artist was influenced by Frans Hals. Just one year later, at the age of eighteen, Ter Borch was accepted into the Haarlem St. Lukas Guild. This fact alone hints at the enormity of his talent, even as a young man. 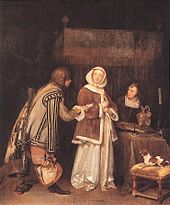 During the early years of Gerard’s career, he tended to paint subjects from everyday life, as well as entertainers and soldiers. His painting The Knifegrinder’s Family is an example of the type of work he produced during the 1630s-50s.

Travel was a major part of Gerard ter Borch’s life. In an age where travel did not come cheap or easy, Ter Borch managed to visit several countries and expand his mind, artistic skill, and worldview. England, Italy, Spain, and France were some of the countries he called home for short periods of time. While living in England Ter Borch’s artistic style was impacted by Van Dyck.

Gerard ter Borch’s technique blossomed during his visit to Italy. It was in Rome that the young man painted Jan Six and A Young Lady (these portraits were painted on copper). In 1648 he traveled to Münster, Germany, when the Spaniards and the Dutch were establishing a peace treaty. The meeting of congress that facilitated the peace treaty was the subject of Gerard’s much loved oil on copper painting, The Treaty of Westphalia.

Gerard ter Borch’s next destination would afford him the honor of a lifetime: Knighthood. While in Madrid Gerard was knighted by Philip IV. He was also given the opportunity to paint Phillip IV. Diego Velasquez, a Spanish artist, influenced Ter Borch’s artistic growth while the Dutch painter lived in Spain. Despite the incredible favor that was shown to him, Ter Borch chose to leave Madrid for the Netherlands due to the “consequence of an intrigue.”

The revered artist finally planted roots in Deventer in 1654. Ter Borch was an influential man in his new city, serving on the city council and continuing to create art. While living in Deventer he drastically changed the subjects of his artwork from common, everyday individuals to wealthy families. The Concert, Glass of Lemonade, and The Fatherly Admonition are perfect examples of Ter Borch’s later works. They are “marked with restraint lyricism.”

1681, the year of Gerard ter Borch’s death, was a sad time for the art world. Ter Borch not only managed to create a pristine career, but he was also set apart as nobility as a result of his talent and excellence. Thus, humanity lost a treasure the day it lost Dutch painter Gerard ter Borch.

Even though there are near 80 works of art in Gerard ter Borch’s collection, the number of paintings available to his fans today is considered small. His exclusive paintings are scattered across the world, housed at prestigious art galleries, including the Berlin Museum, the Dresden Museum, the Hermitage, the Louvre, the Getty Center, and the Wallace Collection. This is how individuals from all walks of life still enjoy Ter Borch’s talent and legacy.

You can find a great collection patterns to use with Segmation SegPlay® PC here: https://www.segmation.com/products.asp .

Have fun and relax with beautiful online painting art. So fun and easy to use with no mess but just a mouse!
Segmation