You are here:
"out of the box" artFoodFood as artphotographsphotographyPhotos 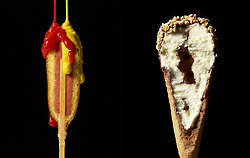 In America, numerous grocery stores line a single street and entire television networks are dedicated to cooking shows. Alarm about nutrition labels and fad diets constantly have the spotlight of public attention. As a nation, Americans are obsessed with food.

This preoccupation allows little time to actually think about what is inside food. We seem to care less about the look, feel, taste and emotion that is associated with food than we do about the nutrition label. Even cultures that coalesce around foods they love to create, like Italians, may not fully grasp the entirety of what is inside their meals.

However, with the help of a culinary creative director and professional photographer, we are beginning to see what truly exists in every bite.

The Truth Behind ‘Cut Food’

Beth Galton and Charlotte Omnés are the masterminds behind a series of photos titled, “Cut Food.” To fully grasp the concept of this series, take the title seriously. This compilation of artwork involves food that is cut down the middle, giving viewers an inside look at the symmetry that lies in the middle of every bite.

In an NPR article, Maria Godoy recaps some of the most popular photographs. She writes, “… ‘Cut Food’ is a photo series that literally cleaves into edibles — hot dogs, ice cream, fried chicken and mashed potatoes with gravy — to reveal gorgeous geometric patterns tucked within.”

Many of their photographs have gone viral and are shared throughout the world. The foods they split and capture are common; most can be found in the grocer’s freezer. In fact, these pictures may even spark cravings.

While photographing some food items seem harder to capture than others, Beth and Charlotte claim there is “little trickery” involved. This statement can be validated by the fact that these images, to be honest, are not entirely unique.

The ladies have put a spin on one of John Dominis’ pieces. In 1966, the late artist worked with beef rolls to discover and display the art that lay inside.

More recently, a research lab in Washington state published a six-volume resource book titled, “Modernist Cuisine: The Art and Science of Cooking.” Researchers used cutaway shots that were said to be “jaw-dropping.” Unfortunately, the price tag was jaw-dropping too. The book first retailed at $625.

On the other hand, the viral images of “Cut Food” can make the jaw-drop and mouth water at the same time.

A Universal Love of Food

The images Beth and Charlotte capture travel throughout the world. The artists’ marvel at the attention they get from people abroad. In a short video that follows the creative process behind “Cut Food” art, they say that the “universality [of their project] is amazing to watch.”

Their art is amazing for many reasons, but universality isn’t the first reason that comes to mind. After all, every people group, culture, tribe and tongue has to eat. Food is all around us. And more often than not, we love it.

A New Art Form that Involves your Favorite Beverages