Flowers are universal symbols of beauty. They also symbolize comfort, love and affection. They are always thoughtful gifts and make ideal decor for any home, no matter how great or humble it is. Flowers are practically perfect.

Throughout history, flowers have been represented widely in the arts. Many of the most famous artists in history painted more than their fair share of flowers. Art history itself tells the story of flowers in the arts.

”Rooted in ancient art and still prevalent today, depictions of blossoms, blooms, and other botanical elements can be found in many of the most significant art movements, whether carved into clay or starring in a still-life.” — My Modern Met

Ancient Egyptians: The First to Represent Flowers in Art History 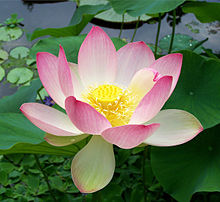 The very first flower ever to be represented in the arts may be the lotus flower. Ancient Egyptians adorned amulets, ceramics and papyrus paintings with the lotus flower, which to them symbolized the sun, according to My Modern Met. A contributor wrote,

“In addition to ornamental decorations, Egyptians also employed flowers as an artistic medium. In King Tutankhamun’s tomb, for example, multiple collar necklaces made of dyed linen and cut blossoms—including sunflowers, cornflowers, poppies, and blue lotuses—were found among his many trinkets and treasures.”

The idea of representing flowers in the arts may have started in ancient Egypt, but it certainly didn’t end there. Flowers were also widely represented in art pieces created in the major periods of art history.

Flowers and plants peppered Medieval art pieces. What’s more, each flower and plant had a specific meaning. Most people alive during this period of history were illiterate, so artists used plants and flowers in their works of arts to communicate with their audience. Floral motifs, which mark this period of art history, are rich in symbolism.

“For the Medieval and the Renaissance artists, flowers were part of a rich visual symbolism.” — Arts Edge 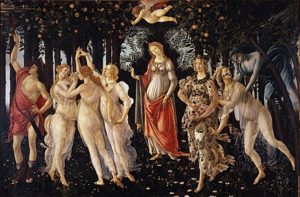 Renaissance artists in particular absolutely loved flowers. They used them as “the main subject as well as the backdrop for some of the most important works of art in tempera on panel, oil on canvas, and fresco,” stated the article Flowers in Renaissance and Baroque Art. “Renaissance artists who mainly produced triptychs, frescoes and altarpieces for the church and private works of art for wealthy patrons offered certain flowers within their compositions as symbols used to instruct the faithful.”

One of the most famous pieces of floral Renaissance art is Botticelli’s “Primavera.” The painting depicts a group of notable figures (including Venus) in an orange grove. A contributor to The Guardian wrote, “The painting teems with life: the myriad shades of the flowers in the dark grass have been analysed by botanists, who identified 200 accurately depicted plants.” The piece of art was created in either the late 1470s or early 1480s and is a large panel painting of tempera paint.

Many other Renaissance works of art are just as dense in floral designs as “Primavera.” “Flowers in a Wooden Vessel” by Jan Brueghel the Elder is just one example. 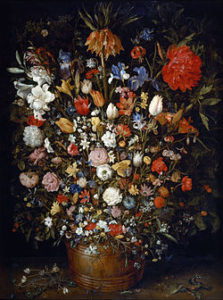 “Flowers in a Wooden Vessel“
Jan Brueghel the Elder
Wikipedia

“While Brueghel sought out very rare flowers (for his floral works of art), he used certain common blooms such as tulips, irises and roses to anchor his bouquets. This may have been a response to his patrons’ wishes as well as compositional considerations. His bouquets were typically composed of flowers blooming in different seasons of the year so they could never have been painted together directly from nature. Brueghel was in the habit of traveling to make drawings of flowers that were not available in Antwerp, so that he could paint them into his bouquets. Brueghel rendered the flowers with an almost scientific precision,” stated Wikipedia.

Flowers in art history certainly didn’t cease to be represented as the Renaissance came to a close. Impressionism, Post-Impressionism, Fauvism, Pop Art, and Contemporary Ephemeral Art all exalted the flower. Learn more about each of these periods of art history and the types of flowers they most commonly used in My Modern Met’s article How Flowers Blossomed Into One of Art History’s Most Popular Subjects.

Are you a die-hard flower fan? Do you also spend a lot of time on your Windows PC? If so, you will be thrilled to know that SegPlay PC exists.

One of the most fun things about SegPlay PC is that it has dozens of corresponding pattern sets that can be downloaded. Once these pattern sets are purchased, you can digitally paint-by-number right on your Windows PC screen. SegPlay PC even gives you the option of printing your artwork! Those who adore flowers can make their computer screens bloom with these floral Segmation SegPlay PC pattern sets:

Are you a flower person? If so, what is your very favorite bud? What does the flower represent to you, and in what season does it bloom? Share your thoughts with us in the “comments” section below.

How to Prepare Your Roses in Spring for Summer Blooming
March 25, 2017

The 3 Most Breathtaking, Artistic Gardens in the World
May 10, 2016