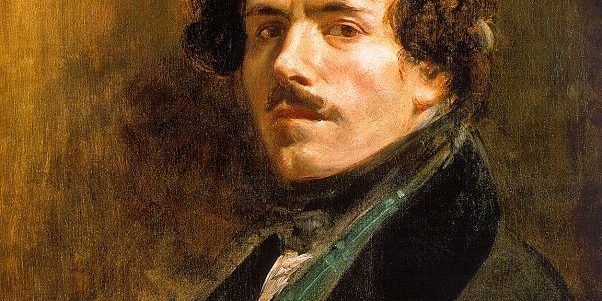 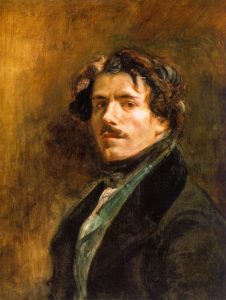 In the art world, the month of April is an important one. Not only is it the birth month of Leonardo da Vinci; it is also the birth month of Eugene Delacroix (1798-1863). Read on to find some fun facts about the French painter who lives on in history as one of the greatest artists of all time.

Who Is Eugene Delacroix?

Eugene Delacroix was born on April 26th in 1798 near Paris, France. Little did his family members know that baby Eugene would mature to become the leader of the French Romantic School. Sadly, at the age of 16, Eugene was orphaned. Also at age 16, he began attending school at Lycée Louis-le-Grand, and at the Lycée Pierre Corneille, where he won awards for drawing. At age 17, he began studying neoclassical painting under Pierre-Narcisse Guérin.

It was in the year 1822 that Eugene officially debuted as an artist at the Paris Salon. Along with other works, he showcased Dante and Virgil in Hell, his first masterpiece. As is stated in Encyclopedia Brittanica’s article Eugene Delacroix, “Dante and Virgil in Hell…is one of the landmarks in the development of French 19th-century Romantic painting…(it) was inspired by Dante’s Divine Comedy, but its tragic feeling and the powerful modeling of its figures are reminiscent of Michelangelo, and its rich colour shows the influence of Peter Paul Rubens.”

Fun Facts About the Greatest French Romantic Painter in History 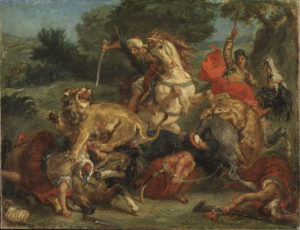 — Emphasized color and movement over clarity, unlike the artists who preceded him.

— “Was given neither to sentimentality nor bombast, and his Romanticism was that of an individualist. In the words of Baudelaire, ‘Delacroix was passionately in love with passion, but coldly determined to express passion as clearly as possible,'” states the article Eugene Delacroix: the Complete Works.

— Like most artists, Delacroix derived inspiration from a variety of sources, including history, literature, and contemporary events.

Do you admire Delacroix’s work? If so, treat yourself to something special: SegPlay PC, a FREE digital paint-by-number game that can be downloaded onto your Windows PC. Once SegPlay PC is installed, you can choose from hundreds of amazing patterns. A few SegPlay PC patterns are based on the works of Eugene Delacroix. We know you’ll love them!

What do YOU admire most about Eugene Delacroix’s artwork? Share with us in the section below. And, on the 26th of April, don’t forget to think of Eugene Delacroix. Remember, it’s the great artist’s birthday!