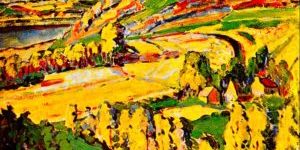 Finding a new favorite historical artist can be as thrilling as finding something you didn’t know existed, such as a lovely antique, but immediately strikes your fancy and makes its place in your heart. You may run across new-to-you historical artists through conversation (if your friends are art buffs, that is), via an Internet search, or by reading an art history book.

Who was the last historical artist you were delighted to discover? Today, we are pleased to present to you Emily Carr, a fascinating female artist you may not be familiar with. If not, you are in for a treat. 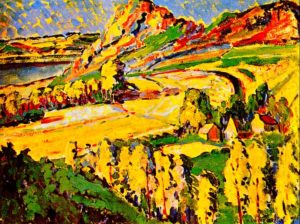 Emily Carr, a Canadian writer and artist, was born on December 13th, 1871, in Victoria, British Columbia. Emily got her inspiration from the Indigenous peoples of the Pacific Northwest Coast. She was among the first Canadian painters to use a Modernist and Post-Impressionist painting style. Like many artists, it wasn’t until later in life that she received recognition for her artistic talent.

She also made her mark on the literary world. Wikipedia stated, “As a writer, Carr was one of the earliest chroniclers of life in British Columbia. The Canadian Encyclopedia describes her as a Canadian icon.”

The Early Life of Emily Carr

The second-youngest of nine siblings, Emily Carr was raised in a family that honored the English tradition. Her father was English and chose to live in Vancouver to maintain his British citizenship.

“The family home was made up in lavish English fashion, with high ceilings, ornate mouldings, and a parlour. Carr was taught in the Presbyterian tradition, with Sunday morning prayers and evening Bible readings. Richard Carr called on one child per week to recite the sermon, and Emily consistently had trouble reciting it,” stated the article Emily Carr.

Though she was raised in a stationary location, she was adventurous to the core. Her wild spirit led her to many wonderful places. 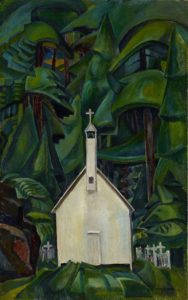 Although her father, who died in 1888, encouraged her artistic talent, Emily did not begin truly pursuing art until about 1890. From 1890-1892, she studied at the San Francisco Art Institute, then came home to Canada. Later, in 1899, she studied at the Westminster School of Art in London. Additional travels took her to the Nootka Indian mission at Ucluelet, a rural art colony in St. Ives, Cornwall, and the Académie Colarossi in Paris.

After getting much artistic instruction during her travels, Emily chose to become a teacher the Ladies’ Art Club in Vancouver. She was there for just a month. “She was unpopular amongst her students due to her rude behaviour of smoking and cursing at them in class, and the students began to boycott her courses,” stated a contributor to Wikipedia.

Though Emily’s teaching career was short, it was not long after it ended that she found her true calling as an artist who preserved Indigenous culture through art.

How the Female Artist Became Interested in Indigenous Peoples

Ever the adventurer, Emily began making trips at age 27 to Aboriginal villages. On these trips, she would paint and sketch her subjects. She would stay in a village near Ucluelet, which was located on the west coast of Vancouver Island. This was home to the Nuu-chah-nulth people group (‘Nootka’ in English).

The young artist was enchanted with these people and their way of life, and her interest was made evident in her art. When she traveled to Alaska with her sister in 1907, her interest in Aboriginal peoples grew. Five years later, in 1912, she took sketching trips to various Indian villages near Alert Bay, the Queen Charlotte Islands, and the Upper Skeena River, and found further inspiration. 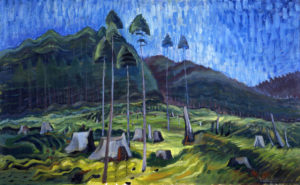 In 1912, Emily decided to open a studio in Vancouver. She was not met with much enthusiasm. Many people were not interested in her radical style, therefore she did not get sufficient financial support. Closing the studio, she went back to Victoria and resumed her travels to the Indigenous peoples of her country.

During a trip to a Haida village on Moresby Island, she painted a carved raven. Over time, it evolved into “Big Raven,” which is one of her most famous pieces. Her painting titled “Tanoo,” which was also created on this trip, featured totems and was unusual in its composition.

Emily’s artistic style was different in that it utilized bold color palettes and lacked detail. “Influenced by styles such as Post-Impressionism and Fauvism, her work was alien to those around her and remained unknown to and unrecognized by the greater art world for many years. For more than a decade she worked as a potter, dog breeder, and boarding house landlady, having given up on her artistic career,” according to Art History Archive.

In addition to looking to Aboriginal peoples for her inspiration, she also gleaned inspiration from the British Columbian rainforest.

During an exhibition in 1912, Emily gave a lecture about the Aboriginal peoples she felt called to, and said this:

“I glory in our wonderful west and I hope to leave behind me some of the relics of its first primitive greatness. These things should be to us Canadians what the ancient Briton’s relics are to the English. Only a few more years and they will be gone forever into silent nothingness and I would gather my collection together before they are forever past.”

This was her mission statement, and she fulfilled it.

Emily Carr Fulfilled Her Mission as an Artist 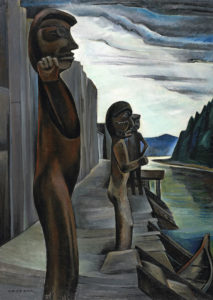 An interesting mix of anthropologist, sociologist, and artist, Emily Carr died in 1945 after having carried out her mission of preserving some of the most important relics of the West’s “primitive greatness.” Today, she is recognized as a groundbreaking, impactful artist. These institutions are named after her:

On the hunt for a fun, challenging-yet-relaxing computer game designed for art lovers? If so, download a free trial of SegPlay PC, a game compatible with Windows PC that combines old-fashioned paint-by-number with the latest technology.

Here are some historical artists whose art you can recreate using SegPlay PC:

Enrich your mind and your life with SegPlay PC and its digital paint-by-number patterns that are based on your favorite historical artists’ masterpieces.

Who Is Your Favorite Historical Artist?

Do you have a favorite historical artist other readers may not be familiar with? If so, please share your thoughts with us in the section below. Don’t forget to let us know if there is a specific artist you’d love for us to blog about in the coming months.