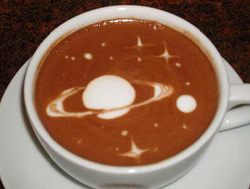 Skies are blue. Clouds are white. The Universe is cosmic latte.

Nature’s color schemes are widely acknowledged and rather predictable. Now there is a color for the Universe as well.

To arrive at this color, astrologers considered the shades of light coming from over 200,000 galaxies. With further analysis, they concluded the Universe was beige. The anticlimactic result led to changing the official name to cosmic latte.

This means color has scientific value and advances human understanding of the universe at large. Now it is clear that color is more than earthly representation of nature, culture, and subjective emotions.

How then can humans determine something as magnificent as the Universe’s color? Might science be wrong? (After all, many of us are still recovering from the Pluto fiasco.)

Who Determines the Color of the Universe?

In 2002, scientists began debating the color of the universe. After leaving a meeting of the American Astronomical Society in Washington, D.C., astronomers from John Hopkins University worked hard to prescribe a color to the heavens.

At first, the John Hopkins team believed the Universe was turquoise. Once they corrected their formula, they discovered the universe was beige. This is somewhat of a letdown for people who prefer to live amongst galaxies shaded in vibrancy, not mediocrity.

How was this Color Determined?

Astronomers concluded that cosmic latte was the color of the Universe after light measurements were taken from more than 200,000 galaxies. These measurements were used to create a spectrum of the Universe. After the sum was calculated, the average optical wavelength of light was figured. In other words, calculating various starlights determined an average color.

What does Color Tell us About the Universe?

Stars are either blue or red, depending on the amount of heat they hold. Since the average color is beige, the universe currently has less blue stars than red. Different from earthly perception, however, these colors are not what they appear: blue indicates a star has a lot of energy and heat, while cooler stars are red.

According to a Daily Mail article, “[the Universe] colour has become much less blue over the past 10 billion years, indicating that redder stars are becoming more prevalent.”

Color may actually be an important factor in understanding the history of the Universe and how our galaxy is constantly changing.

If you could color the Universe, what color would you choose?

Cosmic latte is a creative title for beige. Other titles considered for the Universe color were “Skyvory” and “univeige.” What are your ideas for galaxy color names?

Custom Art Made from Your DNA