Color the Fourth of July with Red, White, and Blue Crafts 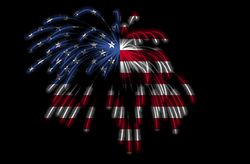 America’s founding fathers faced the tough task of establishing a country and creating a symbol to represent its beliefs. Since start, the American flag has been positioned to embody the nation’s mission and relay its values to others. In its course of existence, the flag has been adopted by new generations and become a beacon of hope to many.

More so, the American flag is a point of pride for the United States. If you are an American, how much do you know about the symbol that represents your country’s patriotism? And for all readers, have you ever wondered why the American flag is red, white, and blue? Or how the concept evolved into this organized design?

A Brief History of the American Flag

The American flag came into being after the Continental Congress authorized a committee to create an official seal for the developing nation. The design needed to reflect the beliefs and values that the founding fathers laid out in the Declaration of Independence.

The colors and symbols used in the seal were chosen to serve a purpose. Eventually these colors were transferred to the flag, which has gone through many variations to become the symbol of freedom that is recognized and cherished today.

The Symbolism of the American Flag’s Colors and Design

Celebrate the Fourth of July with Arts and Craft

If you want to celebrate the festiveness of Independence Day and carry on the historic symbolism seen in the American flag, learn more about these arts and craft ideas:

1)      Help your kids decorate their rooms or the backyard with “Cascading Stars” – http://www.enchantedlearning.com/crafts/stars/cascadeofstars/

2)      Line your yard with “Patriotic Pinwheels,” or bring them along to a parade – http://crafts.kaboose.com/patriotic-pinwheel.html

The American Flag is a symbol of patriotism, hope, and respect throughout the United States. It is also a representation of history that calls citizens to remember the nation’s founding fathers.

When you see American flags, what positive thoughts come to mind? Do you think of purity and innocence, valor and vigilance, perseverance, justice, divine goals, and rays of light? If not, what can you do to participate in America’s original mission and represent these characteristics to all people?

Also, Segmation is interested to know, if you could make a flag to describe yourself, what colors would you use and why?

Read more Segmation blog posts about the Fourth of July:

Do you have a Memorial Day Quote?

Cheap Ways to Decorate Your Home with Evergreen for the Holidays
December 1, 2016
Artist-in-Chief: Presidents are Painters too!
February 10, 2015