Who Was Chickasaw Storyteller Te Ata?

You are here:
"out of the box" artNative American ArtStorytellerStorytelling

“Storyteller” is a title that should be bestowed upon only a select few who deserve it. How many people have you personally known who could tell a great story? Storytelling is an art that can take decades to perfect. For Te Ata Fisher, storytelling was second nature.

Te Ata (December 3, 1895 – October 25, 1995) was a Chickasaw storyteller and actress. Born Mary Frances Thompson, Te Ata was a “Jack” of many trades. She sang, danced and acted, all in an effort to enrich her stories. Here are a few fun facts about her life:

Something interesting about Te Ata is her name, which was given to her by an unknown person. “Te Ata” is not a Chickasaw name; it is the Māori (New Zealand Aboriginal) word for “The Morning.” 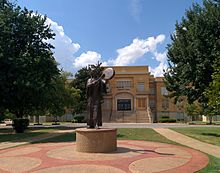 Te Ata began her schooling in a one-room tribal school. After two years she was sent to a Chickasaw boarding school for girls. “In the fall of 1915, Te Ata began college at the Oklahoma College for Women (now the University of Science and Arts of Oklahoma) in Chickasha, and graduated in 1919. During her time at Oklahoma College for Women, she worked as an assistant in the theatre department for theatre instructor Frances Dinsmore Davis. It was during this time that Te Ata was first introduced to the stage,” stated the article Te Ata Fisher.

Regardless of her many honors, some people have no idea who Te Ata was. The Chickasaw Nation recently produced a film about her life to remedy this as well as to honor her legacy (see trailer above). Visit the film’s website to learn more about “Te Ata” the movie.

Te Ata was not only a compelling storyteller and actress, but also an activist. “Thanks to her passion for preserving and spreading tribal culture, Te Ata helped popularize Native American oral traditions during a period of discrimination and racism against American Indians, becoming an unexpected civil-rights icon in the process,” wrote Smithsonian Newsdesk.

Truly, she was a treasure.