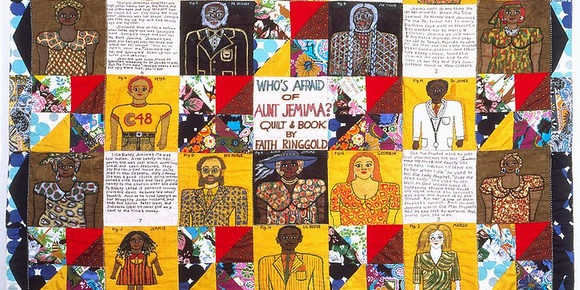 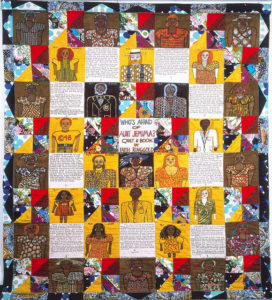 A person’s life story has so much power. When hidden, it can sometimes do damage to the person who has lived it. When told in helpful ways, it has the ability to heal people and cultures. Some individuals tell their priceless life stories verbally. Other don’t tell them at all. Faith Ringgold’s art pieces–especially her quilts–tell her stories.

Artist Faith Ringgold was born in 1930 in Harlem, where she was raised. Like many acclaimed artists, she began making art as a young child. Because she had severe asthma, Faith didn’t start public school until she was in second grade. Instead, she was homeschooled during this time. Her mother invested in art supplies and provided her with everything she needed to pursue her artistic interests. This was heaven for the young artist. She constantly created art, and kept at it after she began public school. Interestingly, as a child/adolescent, she never considered herself an artist. She knew that art was something she immensely enjoyed, but didn’t yet identify herself as an artist. Little did she know that as an adult, “artist” would be the title that the world would identify her by. 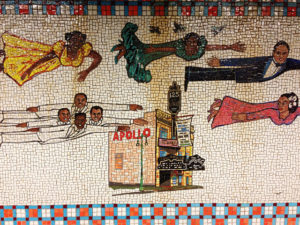 Faith has some interesting memories from her childhood. She recalls her mother’s friends, how often they would come over to her house, and the conversations they would have. The young artist never interrupted; she just listened intently as the people talked about their struggles. The majority of these individuals were from the South and had had a tough time getting to New York. As they talked about how they got to where they were, Faith tucked their stories away in her heart. Understanding grief, sadness, despair, joy, hope, and the entire spectrum of human emotions helped her later in her art career.

Faith’s Fight for Her Education Led Her Into Teaching 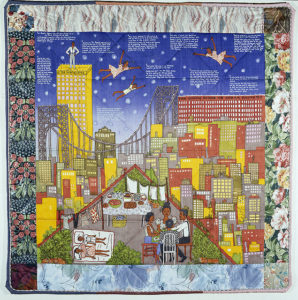 Faith attended City College of New York the fall after she graduated from George Washington High School in 1948. Ms. Ringgold knew since her youth that she wanted to attend CCNY. She and her mother used to walk past the campus and marvel at the Gothic-style buildings. It was always assumed that she would attend college. The question of “where” was answered by her own soul. There was no doubt about it – she wanted to attend CCNY, and she did. Before beginning her schooling, however, she was told that women simply did not receive liberal arts degrees from the college of her dreams. As she said in a video titled Faith Ringgold, Artist, “I was heartbroken because my whole life, going up the hill to school, I would see the kids going to City College and say, ‘I’m going there.’ And now I can’t go? I can’t believe that. So we sat in the office and they talked to me, they explained, ‘You just can’t go to City College because it’s a boy’s school!’ I said, ‘I have no second plan.’ So then somebody came in and said, ‘Well look, why don’t you do this: you can major in art and minor in education and get an art education degree.’ So I did that and I am SO glad I did.” Later, Faith put her art education degree to excellent use directly after matriculating at City College in 1955 – she immediately became an art teacher. She went on to get her MA degree in visual art from CCNY in 1959. It was not until the 1960’s that her personal art began garnering serious attention.

The Journey That Convinced Ringgold to Tell Her Story Through Art 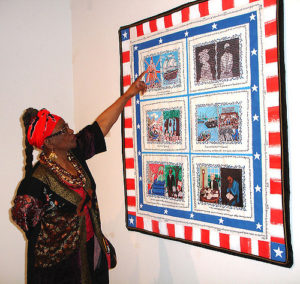 In 1976, Faith Ringgold made a trek to Nigeria to study African art. The pilgrimage stirred in her a strong desire to tell her life story. In the video mentioned earlier she said, “I had such a wonderful experience in Nigeria and Ghana looking at those gorgeous masks and textiles and all of that. I said, ‘I’m gonna write my autobiography.’ I believe that artists should tell their story. It’s very important. There is a tendency for artists to sit around and wait for somebody ELSE to tell their story. Do it yourself.” Faith did have an autobiography published, but her art was and is what tells her story most wholeheartedly.

The Art of Faith Ringgold

The amount of art that Faith Ringgold has created in her lifetime thus far is amazing. She has used paint, fabric, thread, her voice, and mixed media materials to make art pieces that are as controversial as they are beautiful. One of her most famous pieces is Tar Beach, an acrylic on canvas that is tie-dyed and has a pieced-fabric border. It was crafted in 1988 and now resides at the Solomon R. Guggenheim Museum in New York. FWM’s article Faith Ringgold states, “Tar Beach tells the story of a young African American girl who grows up in Harlem, spending her time outdoors on the rooftops of her urban landscape. The narrative is told through text and image, which are printed with dyes on silk duppioni.” Three years after the Tar Beach quilt was made, Faith published Tar Beach as a children’s book. The book has won over 20 awards. Other famous works of art by Ringgold include Crown Heights Children’s History Quilt, Tar Beach 2, Who’s Afraid of Aunt Jemima, Picasso’s Studio, For the Woman’s House, and Flag Story Quilt. 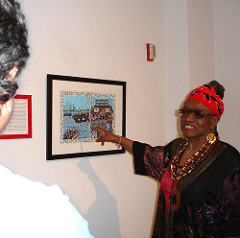 Faith Ringgold is an artist who strives to understand humanity so that she can represent it well in her artwork. She has achieved star status, but that was never what she was after. She merely wanted to tell her story through art, as well as the stories of others, for the purpose of promoting racial and gender equality. She has and is making a difference in the way women and people of all races are treated. Ringgold has proven that one person’s story has the power to change the world.

Do You Wish You Had More Time for Art? Try SegPlay Mobile.

Maybe you don’t have the artistic talent that Faith Ringgold does. That doesn’t mean you don’t love art and shouldn’t have an artistic outlet. If you are one of many who simply don’t have time to create art, consider downloading SegPlay mobile, our FREE digital paint-by-number app. Compatible with most mobile devices, SegPlay mobile combines old-school paint-by-number with the newest technology. The result is an artistic activity you can participate in any time, any place, from nearly any mobile device. Give SegPlay mobile a try and let us know what you think!

Hildegarde von Bingen: Feminist Ahead of Her Time