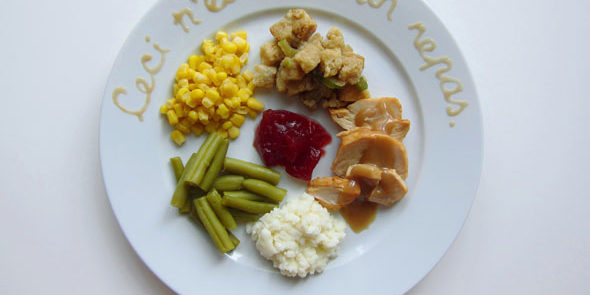 You’d be hard-pressed to find a soul who isn’t familiar with Norman Rockwell. He is the quintessential American artist, and he became famous by creating magazine covers for the Saturday Evening Post for almost 50 years. His artwork depicted typical American life. Since his passing in 1978, Rockwell’s fame has only grown. This world would be a less-rich place if he had not been with us and shared his talent.

Freedom from Want by Norman Rockwell Depicts the “Perfect” Thanksgiving 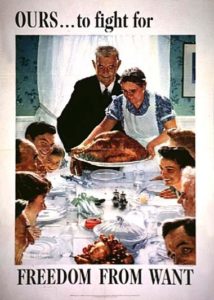 “Freedom From Want”
Image via en.wikipedia.org

One of Norman Rockwell’s most famous paintings is titled Freedom From Want. This painting was featured inside an edition of Saturday Evening Post. The piece was created in response to Franklin Roosevelt’s “four essential human freedoms” of 1941. These freedoms included (and continue to include) freedom of speech and expression, freedom of worship, freedom from want, and freedom from fear. Diana Denny said, “An artist named Rockwell set out to depict these (freedoms) on canvas. ‘In six feverish months during the war days in 1942, wrote Maynard Good Stoddard in the Post in 1995, Rockwell worked diligently on the ‘images of those freedoms, images destined to become enduring national symbols.’” Become national enduring symbols, they have. Freedom From Want depicts a family seated at a lovely-but-simple table, being served a delicious-looking turkey. It is as comforting an image as one can find. Read about some of Rockwell’s other Thanksgiving-themed artwork in Denny’s article. 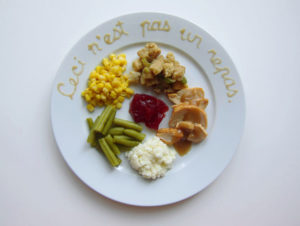 Like Rockwell was, artist Hannah Rothstein is passionate about Thanksgiving. To prove it, she decided to create Thanksgiving dinners inspired by notable artists. They were a hit. Sarah Cascone wrote, “Last year, Hannah Rothstein basically won Thanksgiving with her amazing series of holiday meals plated in the style of famous painters. There was a careful grid alá Piet Mondrian, a tasty version of Vincent van Gogh’s Starry Night, and even a dramatic Jackson Pollock drip painting, cranberry sauce and gravy strewed wildly about the plate. In a word, it was brilliant.” She went on to quote Rothstein: “I was interested in exploring the ways in which different artists express themselves and use line and form. I wanted to do something was topical and I really enjoy using two unexpected elements together.” Rothstein wanted to celebrate Thanksgiving in an unconventional artistic way. She did, and she did it well.

We have two questions for you: 1) What is your favorite Norman Rockwell work of art, and 2) What do you think of Rothstein’s Thanksgiving food creations? Share with us in the section below.

The Stories Behind Holiday Colors