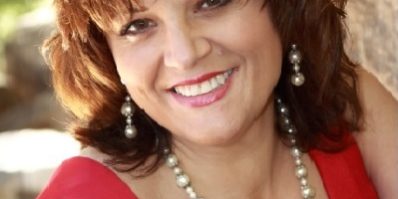 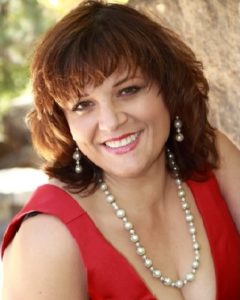 It takes an awfully brave person to reach out for help while in a state of emotional duress. Many of us have a past we’d love to forget, and have tried. However, it’s the rare individual who overcomes his or her nightmares by ignoring them or pretending they don’t exist. All too often, the only way out of pain is straight through it. The braves ones who are willing to face unpleasant memories head-on will ultimately become free of them. Artist Angela K. Stout is one such individual.

Angela, a painter, found art (or rather was found by art) at age 32. In art she discovered freedom, emotional release, purpose, desire, and destiny. Read on to learn more about this incredible artist who graciously agreed to an exclusive interview with Segmation. 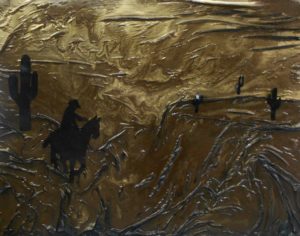 S: Why did you take up art at age 32? Have you always been artistic?

A: I have always been artistic but never really thought I was good at any one thing. I played several instruments, wrote music, doodled, drew basic drawings, did some painting, and wrote poetry, but I didn’t have the confidence to really apply myself to actually doing any of those things regularly. I had been in counseling for about 6 months and was learning to deal with a very rough childhood when my counselor came to the conclusion that I had too much time on my hands and needed a hobby. This made me laugh, but I figured she had a point. I borrowed some of my brother’s art supplies (he was an art major at the time) and created a few things. At first, it was hard to get past the feeling of not being good enough, but then again I was doing a lot of things that were outside my comfort zone in those days. When I showed my brother what I had painted, he was astounded and said, “We found what you should be doing!” He told me to invest in some proper art supplies and get to work. 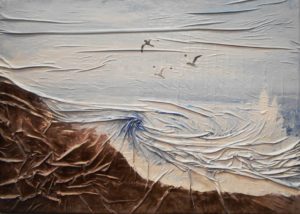 S: Please give us an example of a specific incident when art gave you an emotional release.

A: There have been so many times that I have used art to release emotions. The right side of my brain is so much better at expressing things compared to the left side. Creating art is a non-verbal way to access deep, hard-to-reach memories and process them successfully. I remember one particular day I had been triggered by something that made me tremendously angry. I took out a heavy piece of wood, some black and red paint, and a huge sturdy brush, and went to beating the crap out of the board. I felt a great sense of relief and left the painting in the yard. It rained that night and washed most of the paint away. It was very symbolic. 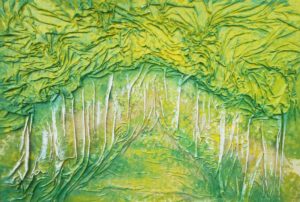 S: What is your favorite color/colors to use in your creations?

A: I always say that naming my favorite colors to paint with is like trying to choose a favorite child. I love them all, and they all have a place in my heart. Gold does run through a lot of my work, so much so that my daughter says I am in my “Gold Period.”

S: What advice would you give an adult who is thinking of taking up art but feels he or she waited too long to do so? What advantages do you feel people have when they pursue art as mature adults? 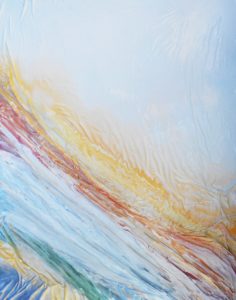 A: If I were to offer some advice to people wanting to pick up painting in their 30’s or later, I would start by saying that art was as good for me as counseling any day. And then I would tell them the story of Margret. She was a student that changed my life when it came to this subject. She came into my studio one day and stated in a matter-of-fact way, “I want to learn to paint.” See, she was 65 years old and had been diagnosed with pancreatic cancer. When it came to learning how to paint, she “just never got around to it,” in her words. As she created some of the most moving art I had ever had the privilege to watch being created, she told me her life story. She had gotten her PhD and was a doctor for 10 years, then gone back to school to be an engineer. After she spent several years in the engineering field, she got her MA in teaching. She taught until she was told that she had 6 weeks to live. She came to class for the next 4 weeks on a mission: to learn to paint. Not only did she learn to paint, she showed me that I don’t have to be limited in any way by anything. She told me, “Don’t let the past dictate where you’re going.” It was because of her that I went back to college in my 40’s and got my degree in art history. I will never forget the lesson my student taught this teacher.

S: What is your ultimate goal when it comes to art? (Do you want to become a famous artist? Make a good living selling your art? Branch out into other mediums?)

A: My ultimate goal when it comes to art? Huh, it has evolved over the years. I wanted fame and yet didn’t want to be visible for a long time. Now I don’t mind the visibility as much and look forward to being able to help more people with any success I have. I think that all artists want to be able to make enough money to live on and buy paint with. Also, we’d all like to have a bit of recognition for our efforts, hopefully before we die. 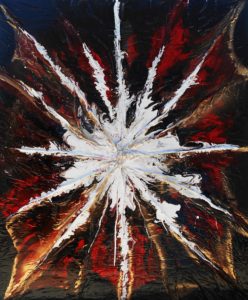 S: What is your favorite piece you have ever created, and why?

A: It’s hard to choose a favorite painting because of that choosing-a-favorite-child thing, but at the moment, I would say Star. Star was inspired by a painting called Jewel by Jay Defeo. I saw Jewel when I was visiting the Los Angeles County Museum last summer. I stood in front of that piece for hours; I loved it that much. I went home and did my more organic, cloth version in what happened to be black, red and gold. Go figure. Yes, I would say it’s still my favorite.

It was pain that led Angela K. Stout to the artistic path, it was pleasure that kept her there, and it is passion that calls her forward into her destiny as an artist. Show Angela your love by following her on Twitter and visiting her personal website.