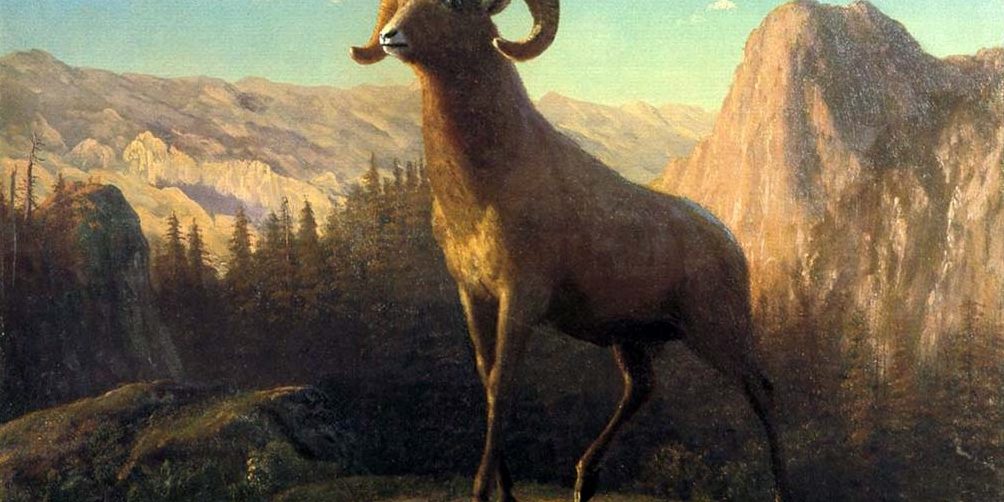 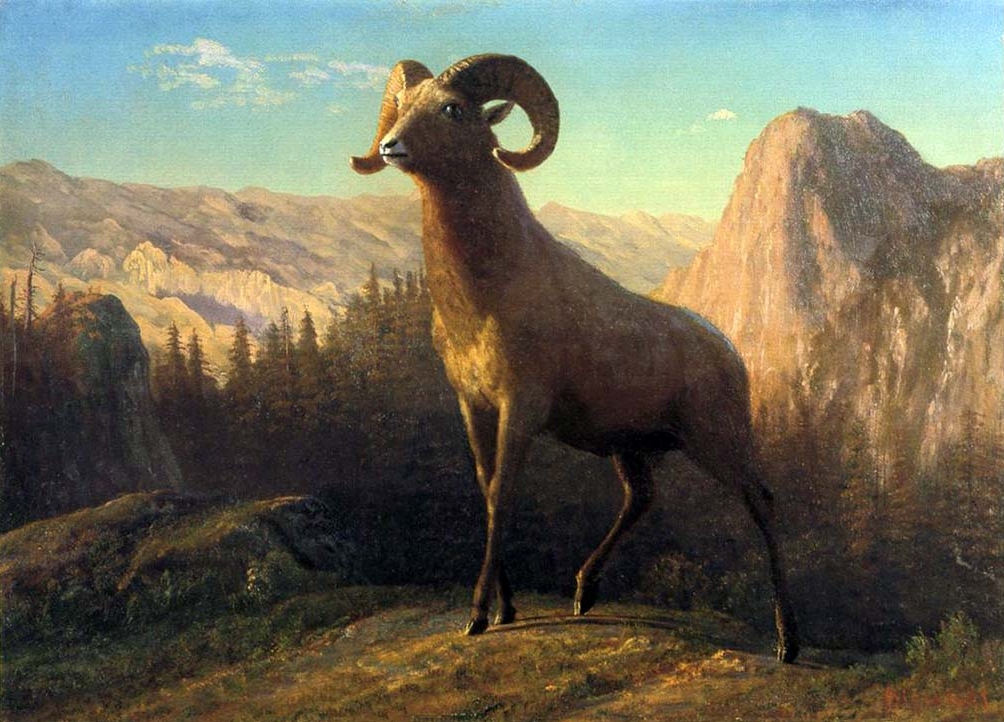 On January 7, 1830, Albert Bierstadt was born in Solingen, Germany. Just one year later, his family moved to New Bedford, Massachusetts. It was here that he began to take an interest in art. This was made apparent by the “clever crayon sketches” he would create as a young child.

When Bierstadt was about 21 years old, he tried his hand at oil painting and found that he wanted to pursue art. In 1853 he traveled back to Germany , this time to Dusseldorf, to study art with distinguished painters Andreas Aschenbach and Karl Friedman Lessing at the Royal Academy. Bierstadt remained in Dusseldorf, polishing his skills and expanding his artistic abilities until 1857.

Returning to America in 1857, Bierstadt taught art for a short season. Soon after, in 1859, his life took an exciting turn of events when he had the opportunity to travel westward with an overland survey expedition.

The young artist took advantage of his time in the west by taking many photographs of the landscape as well as sketching plenty of drawings. The sketches would serve as skeletons of paintings that Bierstadt would create in the future. The American west remained his muse throughout his life, and he traveled there frequently.

Albert Bierstadt’s paintings of the American West were popular and sold for high sums of money. Still, the artist didn’t seem to impress the art critics of his time. His unpopularity in the art world might have been attributed to the large canvases he painted on, which were considered to be an “egotistical indulgence.” Also, the way he used light in his paintings was thought to be “excessive,” as was the romanticism of his subject matter.

Regardless of art critics’ lack of acceptance of him, Albert Bierstadt’s art remained sought-out by the public as his career grew. He became a member of the National Academy in 1860 and was a medal winner in Germany, Belgium, Bavaria, and Austria. He secured a studio in New York City, which he kept from 1861 to 1879. In 1862 Bierstadt continued to build his artistic success by becoming a member of the Century Association.

Bierstadt’s art often featured the landscapes he had seen in his travels across the American west. The painted landscapes, though rugged, were bathed in extravagant light, giving them a romantic feel. The artist paid great attention to detail and adorned his paintings with “mist, fog, and clouds” to create the effects he desired. Bierstadt used colors in an exaggerated way so as to make his paintings more ideal than realistic. Art collectors were (and are) strongly drawn to this type of work.

Throughout his career, Bierstadt exhibited his artwork at the Boston Athenaeum (1859-1864), the Boston Art Club (1873-1880), and the Brooklyn Art Association (1861-1879). Some of his works are currently housed at Boston’s Museum of Fine Arts as well as other prestigious museums.

On February 18, 1902, Albert Bierstadt died in New York City. He is buried alongside his parents in New Bedford’s Rural Cemetery.

German-American painter Albert Bierstadt made a success of his life. He died having created between 500 and 4,000 paintings. To this day, Bierstadt’s art is in demand. His original paintings are sporadically made available for purchase, and the prices at which they sell continue to climb. Commercial prints of his work are most common. In capturing the heart of the American west, Albert Bierstadt also captured the hearts of the American people, which brought him great success in his artistic career.

In your opinion, what artists changed culture and society in significant ways? Who is your personal hero of the art world? We’d love to hear from you, so feel free to share your thoughts in the “comments” section below.