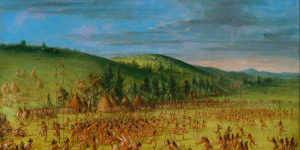 Long before it was trendy to advocate for Native Americans, George Catlin was doing so with his art. During his life he visited many tribes that had not yet been touched by European culture. Over the course of a couple decades, this artist travelled extensively throughout the Americas painting portraits of American Indians and exhibiting them all around the world.

Who Was Artist George Catlin? 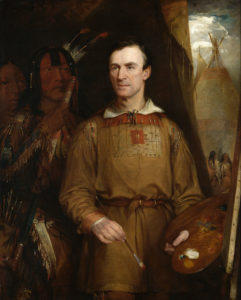 For the United States, George Catlin (July 26, 1796 – December 23, 1872) was and is a national treasure. He was born in Wilkes-Barre, Pennsylvania. Catlin’s fascination with Native Americans began when was just a child in Pennsylvania. His mother had been captured by an American Indian tribe as a girl and told her young son her stories, which piqued his interest in Native Americans. He matured to become the first white man to depict Plains Indians in their native territory, according to Wikipedia.

“One day in 1805, a 9-year-old boy exploring the woods along the Susquehanna River in southcentral New York came face-to-face with an Oneida Indian. The boy froze, terrified. Towering over him, the Indian lifted a hand in friendship. The boy never forgot the encounter or the man’s kindness. The experience may well have shaped George Catlin’s lifework.”

The combination of his mother’s stories and his own experience greatly influenced the young man’s desire to preserve Native American culture through art. 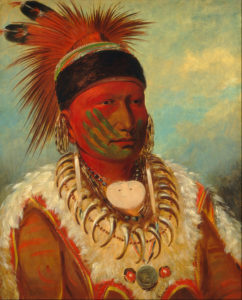 ‘The White Cloud, Head chief of the Iowa’
(Wikipedia)

Before he became an artist, George Catlin practiced law for a short time, after which he joined William Clark on a diplomatic mission into Native American territory. In 1830, St. Louis became Catlin’s base of operations and remained so for five years.

During his travels with William Clark, Catlin “eventually visited up to 50 different tribes at a time when they were untouched by European civilization. His lifetime collection of art works total over 500 accompanied by over 700 sketches,” stated Segmation.

Visiting 50 tribes was quite a feat for this individual who was every bit as much an explorer as he was an artist. But Catlin didn’t stop at 50 tribes — he visited another 18 just two years later, in 1838.

George Catlin: the First White Man to Depict Plains Indians in Their Homeland 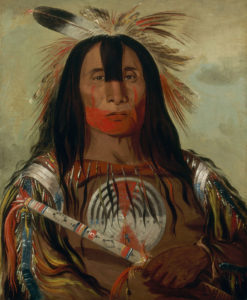 In 1838, after his travels with Clark, Catlin visited Fort Union Trading Post, which was near what is now the North Dakota-Montana border. He stayed for a few weeks with American Indians who had been yet undisturbed by European culture.

While in Fort Union, he visited 18 tribes and “produced the most vivid and penetrating portraits of his career,” stated the article George Catlin. ‘Painting of Stu-mick-o-súcks, a Blood chief’ is considered to be his most prized piece of work. A few of the tribes he visited included the Pawnee, Omaha, Ponca, Mandan, Cheyenne, Crow, Assiniboine, and Blackfeet.

Catlin Displayed His Art in an Indian Gallery

After visiting the various tribes in 1838, Catlin returned east and assembled his collection of paintings to exhibit. He had also gathered artifacts during his extensive travels that were also put on display in his Indian Gallery.

“Catlin traveled with his Indian Gallery to major cities such as Pittsburgh, Cincinnati, and New York. He hung his paintings ‘salon style’-side by side and one above another-to great effect. Visitors identified each painting by the number on the frame as listed in Catlin’s catalogue. Soon afterwards he began a lifelong effort to sell his collection to the U.S. government,” according to John Catlin — The Complete Works.

Unfortunately, George Catlin was unable to generate the income he needed since the majority of the public simply wasn’t interested enough to pay to see his Indian Gallery. He offered the sell the gallery to Congress but was denied his proposal. Following these two disappointments, the artist and adventurer packed up just one year after he began his exhibition journey and took his gallery to several European capitals.

The Indian gallery was more successful in Europe than it had been in America. The public was initially welcoming of his gallery in Paris, London, and Brussels. A French critic named Charles Baudelaire said, “M. Catlin has captured the proud, free character and noble expression of these splendid fellows in a masterly way,” mentioned Georgecatlin.org.

In 1852, Catlin sold his beloved Indian Gallery to industrialist Joseph Harrison because he needed money to pay his many debts. The gallery consisted of an incredible 607 paintings. Although he would have loved to have sold the gallery to Congress, that never came to pass. Harrison stored the paintings in a factory in Philadelphia. Thankfully, the majority of the Indian Gallery is now safe and sound at the Smithsonian American Art Museum.

For the remaining two decades of his life, George Catlin tried his best to recreate the works of art from his original gallery. Art historians named this collection the “Cartoon Collection” since the paintings were created from sketches the artist had made of the original pieces. 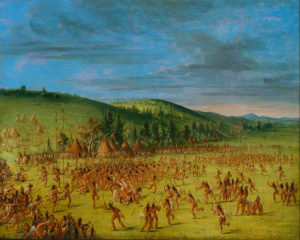 From 1852 to 1857, Catlin had the privilege of traveling through Central and South America and made an expedition to the far west later. Last Rambles amongst the Indians of the Rocky Mountains and the Andes, published in 1868, and My Life among the Indians, published in 1909 and edited by N. G. Humphreys, chronicled these years.

In 1872, Catlin was invited to Washington D.C. by the first secretary of the Smithsonian. While there, he worked in a studio located in the Smithsonian “Castle.” He died later that year in Jersey City, New Jersey, after getting the recognition he truly deserved as an artist, adventurer, anthropologist, and preserver of American Indian culture.

Recreate the Artwork of George Catlin

Interested in recreating some of Catlin’s artwork? If so, check out our George Catlin digital paint-by-number pattern set for SegPlay PC. SegPlay PC is a computer game for Windows users who are passionate about art. It allows art lovers to “paint” famous works of art on their Windows PC and then print them out. Get a free 10-day trial of SegPlay PC here.

Were you familiar with George Catlin’s work before reading this blog article? Who is another artist who specialized or specializes in Native American art that other readers should know about?