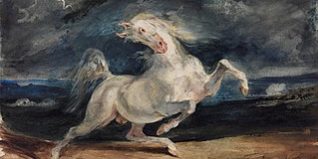 Horses have been represented in art for thousands of years. While horses were not represented as much in modern art than in art of old, they were still depicted by some of the most famous artists who ever lived.

“I speak Spanish to God, Italian to women, French to men, and German to my horse.” — Charles V

Why Did Ancient Artists Depict Horses in Art?

The horse was widely represented in ancient art. It was probably not as present in modern art because it did not have as significant a role in society during that time, and hadn’t for many years. “The horse appears less frequently in modern art partly because the horse is no longer significant either as a mode of transportation or as an implement of war,” stated Wikipedia.

When Did the Horse First Appear in Artwork?

It’s difficult to say exactly when the first horse was painted, drawn, etched, etc. So many pieces of ancient art have been destroyed or lost, and we will never have the privilege of seeing them.

The first horse-themed works of art to be found so far are the prehistoric cave paintings at Lascaux. These paintings were rendered around 20,000 years ago and found in 1940. They contain about 2,000 figures. The figures were not strictly horses; other animals native to the region were included as well.

Related Reading and Video: The Earthy, Enduring Color Scheme of the Cave Paintings at Lascaux

Besides the paintings at Lascaux, horses were represented in several prehistoric works of art. The Uffington White Horse is a perfect example. This masterpiece is a 36-foot-long hill figure. It is a carving, dug very deep into the hill, and filled with white chalk. Located in Oxfordshire, England, the Uffington White Horse is a national treasure. Scholars are still unsure as to when it was crafted. They estimate that it is around 3,000 years old.

Standard of Ur
Wikipedia

The horse was also an artistic subject for Grecian and Egyptian artists who created images of horse-drawn chariots. An example of this type of art is the Standard of Ur, which was made around 2600 BC.

“The ‘Standard of Ur’ is a small trapezoidal box (8.5 Inches high by 19.5 Inches long) whose two sides and end panels are covered with figurative and geometric mosaics made of pieces of shell, lapis lazuli, and red limestone set into bitumen,” stated Penn State Museum.

Take a close look at the Standard of Ur and you’ll get an understanding of what life was like in early Mesopotamia. The piece of art makes it clear that horses were an important part of Mesopotamian culture. 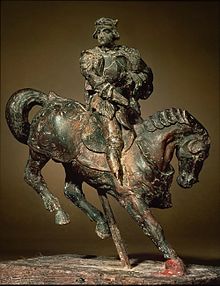 In the Baroque era, equine portraiture became popular (as did equine sporting represented in art), and artists capitalized on it.

Not as many modern artists created horse-themed art as they did in Prehistoric, Renaissance, Baroque, and other later times. “Most modern representations are of famous contemporary horses, artwork associated with horse racing, or artwork associated with the historic cowboy or Native American tradition of the American west. In the United Kingdom depictions of fox hunting and nostalgic rural scenes involving horses continue to be made,” stated Horses in Art. 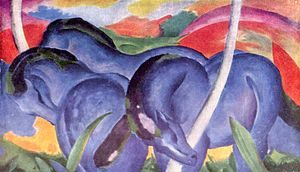 A couple of well-known modern artists who represented horses in their work are Edgar Degas, Pablo Picasso and Franz Marc. Degas created several horse-race-themed paintings. Franz Marc painted The Large Blue Horses in 1911. “The group of animals (in The Large Blue Horses) is rather awkward and bulky, as they are bunched in a small, constricted, entirely blue area, with the viewer’s vantage point close to the action. Compositionally, the animals are more fully integrated with a hilly landscape than was the case in Red Horses,” wrote a contributor to Franz Marc: Painting, Quotes and Biography.

Pablo Picasso had a special love for horses. This is evident in 50 of his works of art that depict them. Museo Picasso Malaga explains the presence and meaning of horses in Picasso’s artwork:

“The very first painting by Pablo Picasso that was ever conserved was painted in Malaga when he was just eight years old, and there is a horse in it. Ever since then, and right into his old age, the horse appears again and again in Picasso’s work. He depicted everything symbolic, noble, grotesque, human and mythological about the beast. Pack-animal, weapon of warfare, element of the bullfight, graceful circus acrobat, fighting stud, harmless wooden toy, winged Pegasus…the horse appears constantly in the work of Pablo Picasso, from the time he painted The Little Yellow Picador after attending a bullfight in Malaga’s La Malagueta bullring in 1889, right up to his latter years in the 1960s, in Mougins (France), where he died in 1973.”

Even fewer artists today depict horses in their artwork than in the modern art era. However, those who do tend to “specialize” in horse-themed artwork, representing horses as the majestic creatures that they are.

All you need for happiness is a good horse, a good gun and a good wife.” — Daniel Boone

“Paint” Horses on Your Windows PC 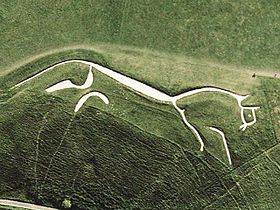 Artists throughout history have used the horse as their muse when creating works of art. Now you can, too. You don’t have to be an artist to do this. All you need is a love for art and, a Windows PC, SegPlay PC and our digital paint-by-number pattern “Horsescapes.”

SegPlay PC is a computer game that combines the newest technology with paint-by-number. It allows you to follow our SegPlay PC patterns (of which there are many) to create your own printable masterpieces. Get a free 10-day trial of SegPlay PC here.

Once you have your free trial of SegPlay PC, don’t forget to download “Horsescapes,” our digital paint-by-number pattern set that shows a diverse set of horse breeds in nature settings. The horses’ beauty is complemented with natural surroundings of open fields, colorful mountains, plateaus and grasslands set against a backdrop of both clear blue skies and cloudy skies.

Here are just a few of the fun patterns included in Horsescapes:

What is the most magnificent horse painting (or other work of art) you’ve ever seen? Share with us in the “comments” section below.

Do you have a more than one favorite Mythological Creatures?

3 Ways that Artists Can Benefit from Blogging
April 19, 2011