How Art Impacted Our Modern Image of Santa Claus 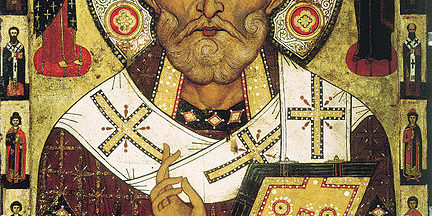 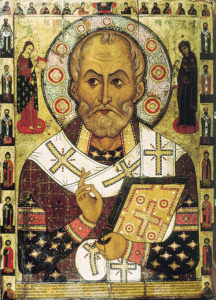 Santa Claus, or St. Nicholas, is a figure who is cemented in the hearts of people all over the world. He transcends time and place, age and culture. He is an enduring symbol of comfort and joy. Children see his image and think of presents; adults see his image and remember their youth. He is represented in movies, art, literature, and music. Before we take a moment to explore art pieces inspired by Santa Claus, let’s discover his origins.

How Did the Legend of Santa Claus Originate?

Have you ever wondered where Santa Claus came from, if he was an actual person, or if he was merely birthed from fable? If so, you’ll be interested to know that Santa Claus was indeed a real man. According to St. Nicholas Biography, “Born in Patara, a land that is part of present-day Turkey, circa 280, St. Nicholas was a Christian bishop who helped the needy. After his death, the legend of his gift-giving grew. St. Nicholas transformed into the legendary character called Santa Claus, who brings Christmas presents to children around the world.” Read more about how St. Nicholas became a household name here.

How Art Impacted Our Modern Image of Santa Claus 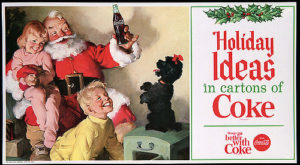 What do you think of when someone mentions Santa Claus? Probably a chubby older man with a white beard and a red suit. Art (namely art that was produced by the Coca Cola company) is most responsible for the fact that we envision St. Nicholas this way. The modern image of St. Nick was solidified in 1931 when the Coca Cola Company began placing advertisements in a number of popular magazines. In many of these ads was the Santa Claus that artist Haddon Sundblom created: round, happy, and sporting white hair. The Coca Cola Company’s blog states, “For inspiration, Sundblom turned to Clement Clark Moore’s 1822 poem “A Visit From St. Nicholas” (commonly called ‘Twas the Night Before Christmas’). Moore’s description of St. Nick led to an image of a warm, friendly, pleasantly plump and human Santa. (And even though it’s often said that Santa wears a red coat because red is the color of Coca-Cola, Santa appeared in a red coat before Sundblom painted him.)” It’s fascinating to ponder the power that one artist had in shaping the way millions of people saw and see a beloved figure.

So, what did people think Santa looked like before the Coca Cola ads of the 1930’s were popular? Who was influencing people’s internal image of him? The answer is “artists.” Artists were producing St. Nicholas in art pieces long before the 1930’s. For example, a thin St. Nicholas was artistically rendered on a Russian icon in 1294 (the image is placed at the top right of this post). There are several other images of Santa Claus that have been passed down over the years. Visit A Pictorial History of Santa Claus to learn more.

This holiday season, you can create your own images of St. Nicholas by using our digital paint-by-number Christmas pattern. This would make a great gift for yourself or a friend!

What is your favorite image of Santa Claus? Share with us in the section below – we’d love to know your thoughts.

Celebrating Over 100 Years of Christmas Lights

Cheap Ways to Decorate Your Home with Evergreen for the Holidays

The Redemption of John Leech, Illustrator of Dickens “A Christmas Carol”
December 22, 2017