The 5 Periods of Berthe Morisot’s Artwork

Berthe Morisot is a name that has echoed throughout history since it first gained notoriety. One of the few historical female artists to have made it into art history textbooks, Morisot’s artistic talent was exceptional. Her upbringing gave her a distinct advantage in art. She was the great great niece of one of the most notable Rococco painters of the ancien régime. Additionally, her father studied architecture. Clearly, a knack for art ran in the family. What’s more, her family was affluent and could easily afford to secure an excellent art education for young Berthe. Wikipedia stated,

“It was commonplace for daughters of bourgeois families to receive art education, so Berthe and her sisters Yves and Edma were taught privately by Geoffroy-Alphonse Chocarne and Joseph Guichard. Morisot and her sisters initially started taking lessons so that they could each make a drawing for their father for his birthday (1).”

Her early art education laid the foundation for Berthe’s art career as an adult.

Young Berthe Met Manet and Monet at the Louvre 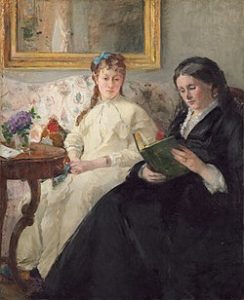 Wikipedia
“The Mother and Sister of the Artist” by Morisot

At a young age, Berthe Morisot was awakened to the unfair advantage male artists had over female artists. Berthe and her sister were allowed to “learn by looking” at the prestigious Louvre in Paris. However, they were barred from formal training and working at the museum unchaperoned. However, the reaped the benefits of learning what they could from mere observation and from rubbing shoulders with the likes of Manet and Monet. Also, they were allowed to begin copying paintings in 1858 when Berthe was about 17.

In 1869, Berthe’s sister Edma married a naval officer and moved to Cherbourg. Based upon their letters, the sisters shared a close bond, and Berthe was disconcerted that her sister drifted away from painting. Edma, however, never stopped encouraging her beloved sister to continuing putting heart and soul into art. An excerpt from a letter from Edma to Bertha stated, “… I am often with you in thought, dear Berthe. I’m in your studio and I like to slip away, if only for a quarter of an hour, to breathe that atmosphere that we shared for many years…(2).” Edma’s support may have helped Berthe continue to grow in her artistic disciplines despite her absence. 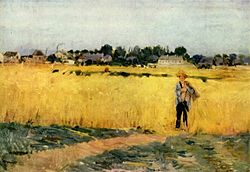 In 1860, when she was about 19, Berthe registered as a copyist at the Louvre. During this time period she became friends with Camille Corot, landscape and figure painter. Corot influenced the young artist to take up a method of working called plein air (meaning “outdoors”).

“Whereas artists such as Manet and Renoir’s works sexualized females, Morisot perfectly captured the self consciousness of women as they are preparing for an evening out. Morisot’s pictures are modest and reveal women who are not acting a part for men, but are instead focused only on themselves. Through her art she challenged accepted ideas of femininity and revealed the life of 19th-century women the way she experienced it.” — Berthe Morisot Style and Technique (6)

The 5 Periods of Berthe Morisot’s Artwork

The 5 periods of Berthe Morisot’s artwork are distinct but cohesive. They include:

1. Training, 1857-1870 — The “training” period of Morisot’s artwork is a bit cloudy. The article Berthe Morisot stated, “It is hard to trace the stages of Morisot’s training and to tell the exact influence of her teachers because she was never pleased with her work and she destroyed nearly all of the artworks she produced before 1869 (3).” What is known is that the following teachers influenced her work: Chocame, Guichard, Corot, and Oudinot. During this period, the young artist experimented with watercolors and pastels.

2. Watercolorist, 1870-1874 — During these 4 years, Morisot spent most of her time working with watercolors. In this period, she found it difficult to work with oil paints and therefore stuck mostly with watercolors. Her watercolor paintings had/have a translucent atmosphere and a fresh feel to them.

3. Impressionist, 1875-1885 — It was in this period that the artist became accustomed to using oil paints and began using oils, pastels, and watercolors at the same time, similar to Degas. She was an exceptionally fast painter as a result of her outstanding preparation (she sketched each of her subjects over and over until she was thoroughly familiar with each of them).

4. Turning, 1885-1887 — In this period, the multi-faceted artist turned primarily to drawing with colored pencils and charcoals. During this span of time, photography was a developing technology and influenced her artwork.

5. New Painting Way, 1887-1895 — In her final artwork period, the New Painting Way, Morisot’s signature style was birthed. Berthe Morisot Style and Technique said, “Berthe Morisot’s work is full of light, bright colors and the brush work is disjointed and varied. She accurately represented natural light by applying a large range of colors to the canvas with petite brush strokes. Although up close her paintings become indistinct, from a distance the works are unified with colors that merge together. Harsh lines are removed by a lack of contrasting tones (5).” 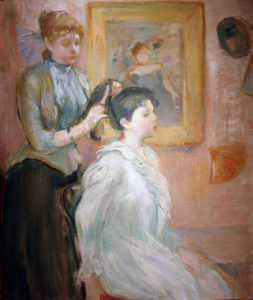 Despite her incredible work, Morisot didn’t achieve the acclaim she deserved while she was alive. The article Berthe Morisot — Painter by Biography stated,

”…although (Morisot) was never commercially successful during her lifetime. She did…outsell several of her fellow Impressionists, including Monet, Renoir, and Sisley. She had her first solo exhibition in 1892 and two years later the French government purchased her oil painting Young Woman in a Ball Gown (4).”

“Probably because she was female, Morisot’s work was undervalued for over a century. She is now considered among the most elite of the impressionists.” — Segmation 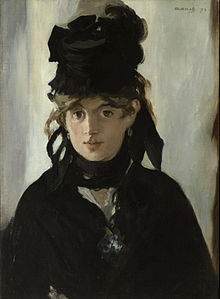 Wikipedia
“Berthe Morisot with a Bouquet of Violets” by Édouard Manet

Do you love the work of Berthe Morisot? Would you like to re-create her art? You can with SegPlay PC, our computer program for Windows PC. SegPlay PC is a digital paint-by-number game that allows users to “paint” like their favorite artists. Get started recreating Morisot’s works by…

Which of these works of art is your personal favorite?

Post-reading questions to ask yourself: