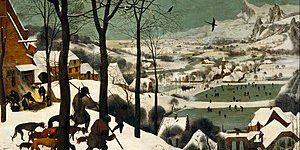 The Gift of Snow

The quotes above attempt to describe the beauty of snow. Its still, quiet, pure presence makes even ugly things lovely. It christens common ground, unifying everything on earth. Snow gives us the gift of a fresh perspective. Snow is, in a word, captivating. Artists like Monet, Van Gogh, and Pieter Bruegel the Elder thought so, too. 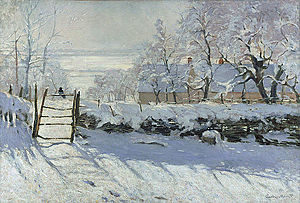 Throughout the ages, artists have been drawing, painting, and sculpting snowy scenes. Many of these scenes are nearly as captivating as snow itself…especially these three:

1. The Magpie, 1869 — Created by Claude Monet, The Magpie is an oil-on-canvas landscape painting illustrating the natural effects of snow. According to Wikipedia,

“Between 1867 and 1893, Monet and fellow Impressionists Alfred Sisley and Camille Pissarro painted hundreds of landscapes illustrating the natural effect of snow (effet de neige). Art historians believe that a series of severe winters in France contributed to an increase in the number of winter landscapes produced by Impressionists.”

True to the piece’s name, The Magpie depicts a magpie sitting on a wattle fence. This painting was one of the first in which Monet used colored shadows “to represent the actual, changing conditions of light and shadow as seen in nature.” In later years, colored shadows were associated with the Impressionist movement. To prove his fascination with snow, Monet painted 140 snowscapes during his lifetime.

2. The Hunters in the Snow, 1565 — One of the most famous pieces produced by Pieter Bruegel the Elder, The Hunters in the Snow, otherwise referred to as The Return of the Hunters, is an oil-on-wood painting that depicts three hunters returning from a winter hunting trip with their dogs. This painting was commissioned by a wealthy banker. “Bruegel’s painting, with its bare trees and people bundled against the cold and hard-packed snow, is part of a long tradition in Northern European art of portraying the months of the year and the activities that occurred during each month,” wrote Dr. David Boffa. 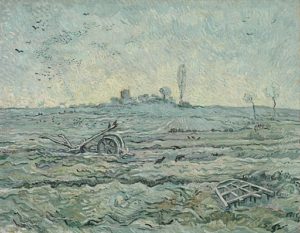 Snow-Covered Field with a Harrow
Commons.wikimedia

“After a long period of psychological crisis, Van Gogh had lost his confidence in himself, as a person and a painter. For a long time, he felt useless and didn’t even dare to go outside. To build up his self-confidence again, he started copying prints — a common exercise for beginning painters.”

“Let It Snow” on Your Windows PC

Do you have a Windows PC, a love for art, and a fascination with snow? If so, download a free trial of our digital paint-by-number computer game SegPlay PC. It is compatible with Windows PC and allows aspiring artists to print their digital paint-by-number artwork. Let it snow on your Windows PC with our snow-themed SegPlay PC pattern. Give it a try and give us some feedback in the “comments” section below. Disclaimer: SegPlay PC can be addicting!

Color Icicles without Going Outside
November 27, 2013